Matt Ritchie could leave Newcastle United this summer, according to The Athletic’s George Caulkin.

While the first summer window under the PIF ownership is not expected to a period of lavish spending, a rebuild looks likely.

Eddie Howe himself has spoken about players to have performed well for the club over the years leaving at the end of the season as Newcastle look to move on from the Mike Ashley era by bringing in new signings themselves.

Ritchie, who still has a year left on his £45k-per-week (via SpotRac) contract, is expected to depart after six years of his loyal service. Brought to St James’ Park in 2016 by Rafa Benitez, the former Scotland international played an instrumental role in helping secure a quick-fire return to the Premier League, and has provided some big moments in the top tier.

Indeed, his goals in wins over Arsenal, Manchester United and Manchester City will live long in the memory and the fact he had to change his position from right-winger to left-back spoke of an ultimate professional.

“He has another year left on his contract, but I’d expect him to go,” wrote Caulkin during The Athletic’s coverage of Monday night’s win over Arsenal.

Is it time to move from Ritchie?

While Ritchie’s impact in the dressing room cannot be understated, Newcastle have to be looking at upgrades. 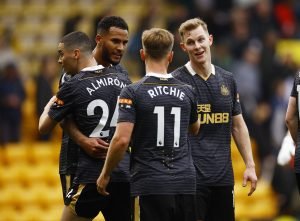 Matt Targett’s form since signing has been impressive, while Atletico Madrid’s Renan Lodi is reportedly an eye-catching target at left-back. With Paul Dummett available in reserve and Newcastle needing to balance the books in terms of FFP, Ritchie’s potential exit looks a manageable one.

Previously linked with a return to Bournemouth, the 32-year-old has not started for Newcastle in 2022 and it’s hard to see a way for him back into the team.

What has Eddie Howe said about Matt Ritchie?

Speaking in November, Howe praised Ritchie, Callum Wilson and Ryan Fraser for helping his coaching staff settle in on Tyneside.

“Matt’s a very inspiring character,” he told The Shields Gazette.

“Having worked with him previously, he’s someone along with Ryan and Callum obviously that have a greater understanding of our work.

“It’s been great to see them again and work with them again, and try and get them to help the other players understand what we expect. I think that’s been a really useful thing for us to have at this early stage.”
Give us feedback