Joelinton should be fine to feature for Newcastle United in pre-season, according to The Chronicle’s Lee Ryder.

The Brazilian’s brilliant season was brought to a slightly earlier end than expected at Burnley on Sunday after suffering an injury less than ten minutes into Newcastle’s 2-1 win.

Replaced by Jacob Murphy following an ankle landing when stretching for a header, there will have been concern. One of the club’s leading players after a rebirth under Eddie Howe, the prospect of a long-term injury was a hugely disappointing one, with Newcastle looking to build next season.

In the wake of the win, however, Ryder provided a promising update. While the 25-year-old is understood to have suffered a “deep laceration” on his right foot, Joelinton is believed to be likely to be fit for pre-season after a few weeks of rest.

How important is Joelinton to Newcastle?

Clearly, October’s takeover changed everything for the club and Howe’s appointment a month later was another crucial step. Still, it’s hard to downplay just how transformative the decision to deploy Joelinton as a central-midfielder when Ciaran Clark was sent off against Norwich proved to be.

FBREF data notes that no one in the Newcastle squad made more ball recoveries (241) or attempted more pressing actions (610) all season. In an attacking sense, the man once derided as a £40m flop ranked within the top five in the squad for key passes (28) and goals (4). 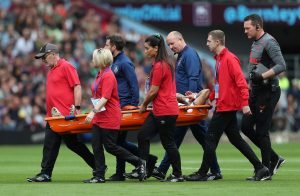 Going forward, with a full season under Howe in his new position, it’s going to be fascinating what the future holds.

What has Eddie Howe said about Joelinton?

Speaking after Joelinton hinted Newcastle should be targeting Europa League, Howe talked fondly of his player.

“He’s a good guy, Joe, and he’s very positive and optimistic, and I think we should be,” he said (via The Independent).

“I’ve got no issue with that and I want to harness that.

“I want my squad to be confident, ambitious. They have to believe in big things and we have to set targets internally.”