Where Howe’s team could barely lay a glove on Liverpool and Manchester City, they battered an admittedly poor Arsenal side, with even the Gunners chief admitting the home side were “100 times better” all evening.

Wilson, making his first start since December, was crucial. Constantly harrying the backline, it was he who forced Ben White’s own goal to give Newcastle the lead, with the 30-year-old even losing a tooth during a battle with Arsenal defence.

Bruno Guimaraes would add a second in the dying embers to add a layer of gloss to a result Newcastle always looked like getting, finally seeing them beat a team in the top seven.

What does this mean for Newcastle going forward?

The fact a top-six team were beaten so easily is an exciting prospect ahead of next season.

Both Jamie Carragher and Gary Neville highlighted Newcastle as a worry for the teams chasing European qualification next season and, based on the form they’ve shown since Christmas, it’s difficult to argue with that. 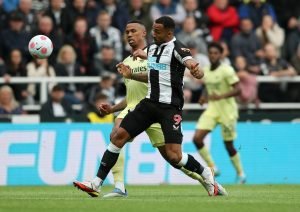 St James’ Park has become a fortress under Howe and if that kind of performance can become a regular thing against England’s leading sides, who knows just how highly Newcastle can finish next season. Clearly, there are going to be bumps along the way, but there is now a platform on which to build against teams higher up in the table.

Indeed, as Wilson asked after the game, why not try cause upsets next season?

What did Wilson say about the result?

Speaking to BBC Sport after the game, the former Bournemouth striker said: “We took the game to Arsenal and deservedly got the three points.

“Everybody wrote us off at Christmas and it was about proving people wrong. Now it’s about not resting on our laurels. The boys are putting their bodies on the line – I’ve had a tooth knocked out and a split lip. It’s like a war out there.

“The manager has stabilised us. He’s brought in some great players and instilled a style of play and philosophy at the club. Why not cause upsets higher up the league and take the game to Arsenal?”