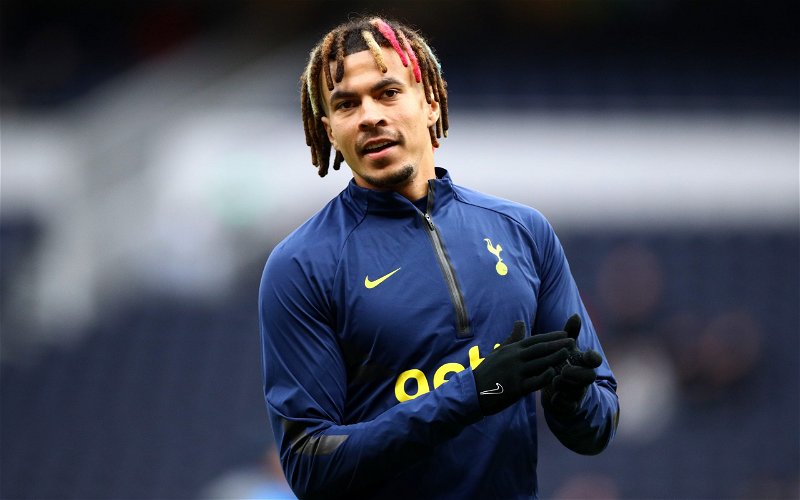 Newcastle United are interested in bringing Dele Alli to St James’ Park this season, according to Dean Jones.

The Tottenham Hotspur and England midfielder has suffered a fall from grace since Jose Mourinho replaced Mauricio Pochettino as Spurs manager in late 2019.

Infamously criticised during Spurs’ “All or Nothing” Amazon documentary, Alli has only been afforded two minutes of Premier League action since Antonio Conte took over from Nuno Espirito Santo in October.

According to the Evening Standard, the 25-year-old will be allowed to leave in January after failing to impress Conte.

What did Dean Jones say about Dele Alli and Newcastle?

Speaking on the latest episode of the Touchline Talk Podcast, Jones confirmed Newcastle’s interest but did suggest it might not be the right move for him at this time.

“Newcastle are obviously bang in for him,” says Jones from the 8:26 mark onwards.

“Does this make sense for Dele Alli? Does he really want to go to Newcastle? Scrapping for every point, for every ball, I don’t see how that suits him or benefits him at all this season.”

It would appear so, yes.

Back in 2015, before his ascension to one of the leading players for club and country, Newcastle reportedly agreed a £5m fee for Alli when he was still at MK Dons.

What are Dele Alli’s stats this season?

As unfancied as he’s been by Conte, Alli had started the season rather prominently under Nuno.

Still, he struggled to make much of an impact with WhoScored noting he was averaging 0.4 dribbles, 0.9 shots, 1.6 tackles and 0.4 interceptions per game. Clearly, Alli isn’t exactly in great form and has previously shown he can play at a much higher level but those averages wouldn’t rank well within Newcastle’s squad, even this season.

Indeed, Alli would rank 10th, 6th, 9th and 16th in Eddie Howe’s squad based on those averages.

Whether they would improve is of course up for debate but, the fact remains, this is a player chronically out of form.