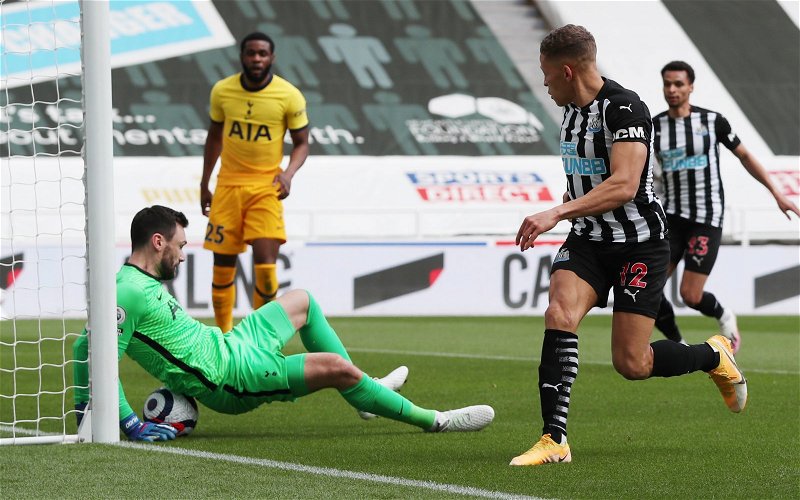 Despite reports last week that Dwight Gayle had agreed a new contract with Newcastle United, the 31-year-old remains a transfer target for a number of clubs.

According to the print edition of yesterday’s Sunday Mirror (page 63), leading clubs in Turkey, Qatar and Saudi Arabia remain keen on a move for the player who is yet to officially pen a new deal at St. James’ Park.

Could he still leave?

The Athletic did suggest last week that he had agreed a new three-year deal with the club he joined in 2016 though Chris Waugh also hinted that he had considered the idea of a move abroad. Still, Waugh also reported that the pandemic had complicated matters and may have limited his options.

Well, the idea of rival interest isn’t exactly the best news Newcastle could ask for – particularly from potentially money-spinning leagues such as the ones mentioned above – but last week’s reports did suggest he had reached an agreement with Newcastle.

While Gayle should have scored against Tottenham on Sunday, his overall game was impressive. Indeed, according to WhoScored data, he hit the target with two of his four shots, as well as playing a key pass and he also won two aerial duels.

Crucially, he is one of only six Newcastle players who have averaged at least a shot a game this season too which, given the overall lack of firepower, has at least helped going forward.

A prolific option at Championship level and Newcastle’s best source of goals outside of Callum Wilson in terms of the strikers playing in Steve Bruce’s tenure, having to replace him in the summer would surely cost far more than it would to tie him down to a new deal over the next few weeks and months.