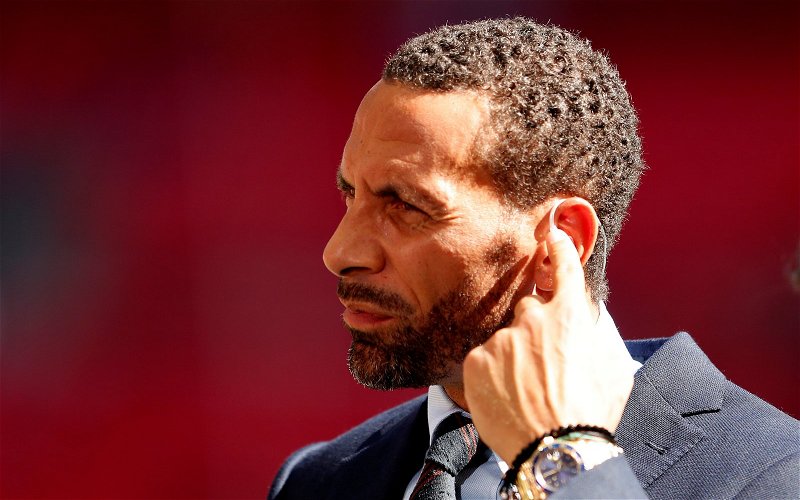 BT Sport pundit Rio Ferdinand may well have invoked the ire of Newcastle United supporters during his defence of Mike Ashley in 2019, so his comments lamenting the state of former club Manchester United following their loss to Burnley last night were always going to be of interest to the Toon Army.

Posting a video of the retired England defender slating what’s happened to his former charges under the current regime, plenty of Magpies replied suggesting he was being hypocritical after previously suggested Newcastle fans should ‘say thank you’ to Ashley for employing Rafa Benitez in the first place.

After all, this is a man who told Newcastle fans ‘they’ve got to aim to be a Bournemouth’ during BT’s coverage of their game against Chelsea in 2019 (via talkSPORT) and then seemed to mock them on Twitter by saying the club was ‘turning a profit, no debt and oh, playing in the PL!’ a day later.

As you can imagine, following his words about his beloved Manchester United, plenty of Toon fans duly reacted.

Why aren’t you telling Man Utd fans they should be happy?

You’re a hypocrite and a sell-out, Rio

Any regrets on what you said about Newcastle?#PotCallingKettle

Berate #NUFC fans for bemoaning an owner with a net spend of 37 pence, yet Man U's £1.1bn spend is something to be whinged about? #MUFC Incredible facilities, huge wages, massive players, in a transition vs NUFC's years of neglect and relegation. Heads gone, Ferdinand.

Wasn’t this when you spoke about Ashley at Newcastle? But now it’s happening at Man United and there owners aren’t selling your merch something should be done about who’s running the club? Come on Rio, Ole’s at the wheel man, he’s doing his thing, Man United are back. #Clown https://t.co/OD9c75Pewc

What did you make of Rio’s outburst? Join the discussion by commenting below…