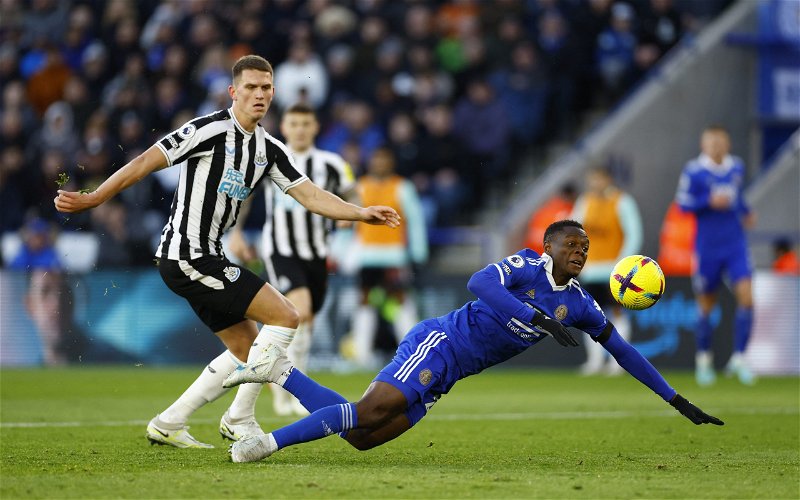 Newcastle United showed no signs of a World Cup hangover with a thumping 3-0 win over Leicester City to go second in the Premier League.

Chris Wood, Miguel Almiron and Joelinton all struck in a hugely entertaining first-half at the King Power Stadium, just over a year after Eddie Howe’s side were battered there 4-0.

Winning their first game back by such a huge margin and away from home after the break sends a huge statement of intent, particularly without Callum Wilson, Alexander Isak and Jonjo Shelvey.

Here’s how the Newcastle players rated against Leicester…

Made a crucial intervention to stop Patson Daka pulling one back for the home side with the score at 2-1, which could well have changed the game. Another huge save from Jamie Vardy (who would have been offside) shows just how reliable the England international is.

As classy on the ball as always and his proactive approach helped Newcastle on the break when Leicester were ramping up the pressure before Joelinton’s goal. Another assist for the England international too.

Brilliant at intercepting the ball when Leicester looked to get behind the away side’s back line and Schar’s long-range was a major attacking weapon throughout.

Botman’s adaption to life in the Premier League has been remarkable. While Daka proved dangerous at times, the Dutchman had him covered. Vardy’s introduction made life slightly more difficult and he was somewhat lucky not to have been involved in a clumsy own goal, though that first-half performance was outstanding.

Solid as always, without setting the world alight this afternoon. Couldn’t have been blamed if Botman’s clearance into his feet had trickled past Pope.

Perhaps not at his lung-bursting best like the last time he faced Leicester but played in Almiron for the second and teed up Joe Willock with a fantastic reverse pass, though the move ultimately came to nothing. Guimaraes has had more eye-catching performances, but hardly put a foot wrong in a composed display.

Excellent. Longstaff was tireless in midfield, helping push the team forward as well as winning some important fouls when Leicester looked to hit the away side on the counter. Surely playing his best football since breaking into the team back in 2019. 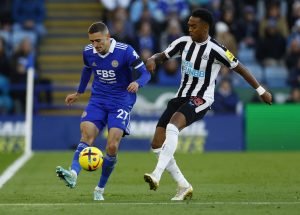 Willock’s ability to overlap Joelinton in the wide left channel is such a crucial asset. A genuine danger breaking from deep, he helped pin the Leicester full-backs back all afternoon.

Another brilliant goal for Almiron, who put the sitter he missed against Bournemouth on Tuesday behind him. It’s hard to find anything new to say about the man in form and the ease in which he finished a flowing team move speaks to the confidence with which he’s playing. His pressing caused problems for Leicester throughout the game too.

Blasted in a penalty to set the tone early. That’s now two goals in his last Premier League appearances, proving he can cover for Wilson and Isak in the short-term at least.

Brilliant in a left-wing role, much as he is in central midfield. Won the penalty and scored a powerful header, as well as making a host of important interceptions.

The sight of him building up his fitness is another boost for Newcastle, even if he could do little with a brief cameo.

Not given a huge amount of time but pressed well to deny Leicester building up in the latter stages. Had one cleared off the line in extra-time but would have been offside anyway.