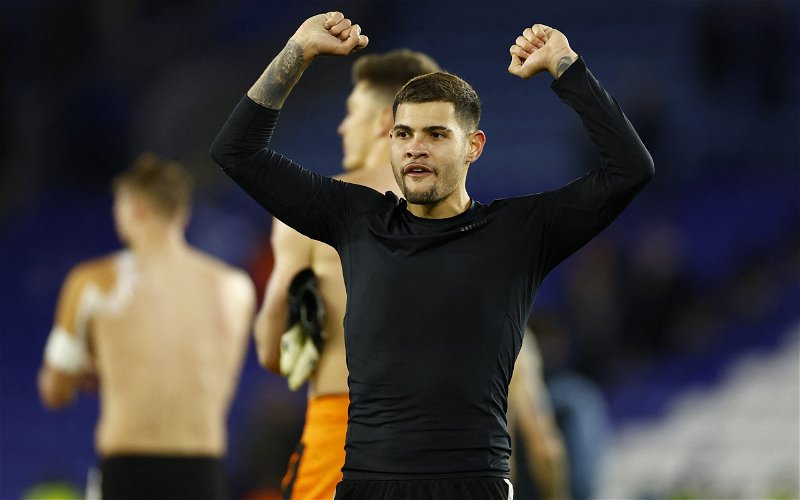 A beaming Bruno Guimaraes said he was close to crying as Chris Wood poured praise on him following Newcastle United’s Boxing Day win over Leicester.

The Brazilian, only recently back from the World Cup, played a key role as Newcastle went second in the Premier League with a 3-0 win at the King Power Stadium.

While a different performance to the one that saw him score twice against the Foxes back in April, the composed quality with which Guimaraes helped dictate the game spoke to his quality. Indeed, the 25-year-old is equally capable of pulling strings as he is bursting forward to get on the scoresheet.

Guimaraes teed up Miguel Almiron for Newcastle’s second goal only minutes after Wood had opened the scoring in the third minute with a thumping penalty as Eddie Howe’s side went second in the Premier League. Straight back into it after the World Cup, that was quite the statement of intent.

What did Wood say about Guimaraes?

Speaking to Prime Video, Wood said: “His quality is becoming normal, which is scary because he’s that good.

Chris Wood on the 'scary' quality of @brunoog97 – man of the match at Leicester 💫 pic.twitter.com/ktNKJnXmPc

“We’re thankful to have him, he’s a fantastic player and he’s always the difference-maker and that’s the best thing about it.”

To which Guimaraes replied: “You will make me cry my friend. Thank you so much.”

How well did Guimaraes play against Leicester?

According to WhoScored data, the former Lyon man played a key pass (behind only Kieran Trippier’s 4 in Newcastle colours), had three shots (the highest for the away side) and contributed four dribbles (again, the highest).

Moreover, five of his six long balls found their target and 83.7% of his 43 passes were successful, indicating just how effective he was pulling strings in the middle of the park.