Newcastle United are unlikely to prioritise the potential signing of Lyon’s Lucas Paqueta, according to The Athletic.

The Lyon attacker, who is good friends with Bruno Guimaraes, has been linked with a £50m move to St James’ Park.

Paqueta reportedly came to watch Guimaraes’ first start against Southampton – a game in which he scored a brilliant goal – and was even spotted donning a Newcastle top when visiting his compatriot’s house.

Given the success of the Guimaraes signing, there was naturally some excitement on social media in regards to his potential arrival. Having scored 11 times and registered 7 assists in 44 appearances across all competitions this season, coupled with the fact Newcastle are believed to be chasing attacking reinforcement, it seemed a fairly logic addition.

While the 24-year-old is understood to have been discussed in January, Newcastle seem set to focus on strengthening in other attacking areas.

Both a new striker and a goal-scoring winger have been eyed amid suggestions the club have made a move to sign £40m-rated Bayer Leverkusen winger, Moussa Diaby. 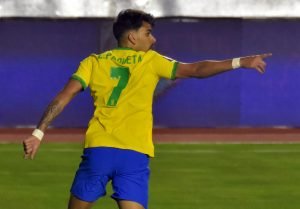 It’s also worth remembering, of course, that Eddie Howe has deployed a 4-3-3 system since his appointment in November. Although Paqueta is able to operate across the frontline, the bulk of his appearances this season (23) have come as a No.10, something Newcastle do not play with.

What has been said about Paqueta and Newcastle?

“We will have to wait and see because just visiting the city could mean nothing but there have been links,” he said.

“He’s the calibre of player Newcastle could sign these days so why not?

“It looks like they are in a brilliant position to sign him if that’s what they want to do.”