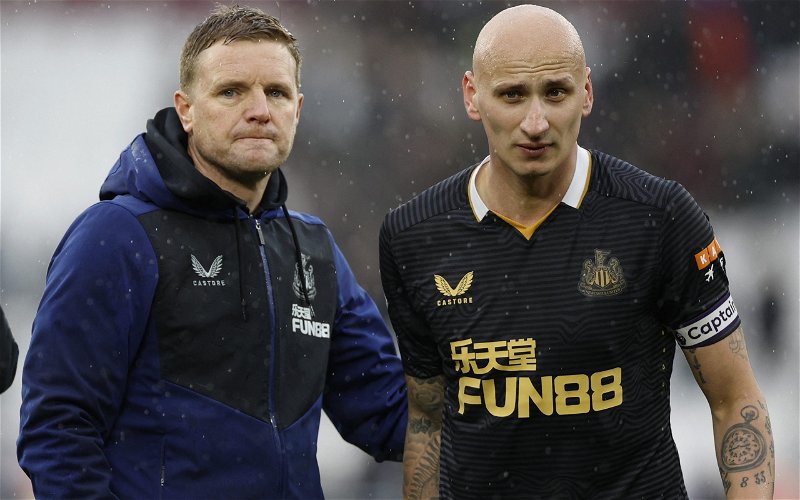 Shelvey, who has often proven a divisive figure on Tyneside, has emerged as a key player under Eddie Howe.

While the 30-year-old has largely always featured in the first-team since joining the club in January 2016, it is under Howe where he appears to be hitting new heights.

Indeed, Shelvey was hailed by Glenn Hoddle for having played a key role in the team’s recent resurgence, having started all of the games for which he’s been available since Howe was appointed as Steve Bruce’s successor in November.

Recent reports from The Daily Telegraph suggested the six-cap England international was in line for a new contract at the club and Shelvey himself has spoken of his desire to stay.

How long does Shelvey have left on his Newcastle contract?

Currently, Shelvey has just over a year to run on his deal.

At 30, it’s hard to see him being handed a particularly long one – especially as the club will surely be shopping in more expensive markets following the takeover – but Shelvey is showing little sign of slowing down.

According to Spotrac data, the former Liverpool midfielder earns around £70k-per-week.

What has been said about a new deal for Shelvey?

“You can’t just ship out all the players who have been there for years. It has to be a gradual thing.

“I like Shelvey, he always scores wonder goals. He is a brilliant player for me and he’s been a great servant for them.

“Even if he isn’t playing every game next year, it’s a long old season.

“You need options and Shelvey is the kind of player who can change the game if you give him the chance.

“It’s a no brainer for me, to give him a contract. He’s been brilliant since Howe came in.”