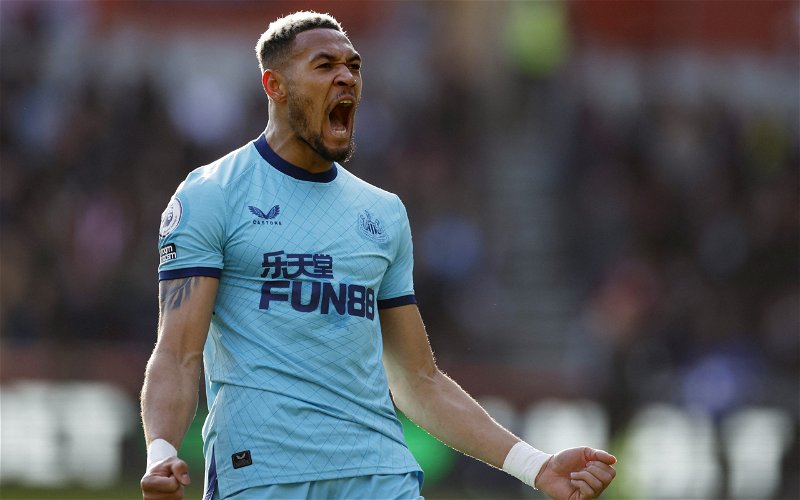 Joelinton hailed the Newcastle United support following his crucial goal against Brentford on Saturday while speaking to the club’s official media channel.

The Brazilian’s transformation has been one of the most fascinating subplots of the season from a Newcastle perspective.

Derided as a £40m flop by some after failing to convince as the club’s first-choice striker, the 25-year-old has now emerged as a major figure in the club’s midfield following the appointment of Eddie Howe.

In fact, the former Hoffenheim forward has started every game of the Howe era, moving into midfield for the first time during December’s draw with Norwich City and is forming part of a three-man unit alongside Joe Willock and Jonjo Shelvey good enough to keep Bruno Guimaraes out of the starting lineup.

A popular figure amongst the club’s support, Joelinton’s goal – a crucial opener against a relegation rival – was surely the best moment of his career on Tyneside thus far.

What did Joelinton say about his goal?

Speaking after the game, Joelinton dedicated his strike to the supporters.

“Every time you score, it’s a great feeling. I ran to the fans because they support me, support the team and it’s a long trip here.

“They deserve it, they are always behind us. The goal is for the fans.”

What has been said about Joelinton?

After the Brazilian was handed the Man of the Match Award for his performance against Manchester United in December, teammate Sean Longstaff provided some insight into how Joelinton was seen behind the scenes.

“I think the disrespect he gets is a disgrace to be honest,” he said to Sky Sports (via The Daily Mirror).

“I can honestly say everyday in training he’s the best player. If he’s on your team, you’re winning. If you get Joel you’re sort of buzzing.”