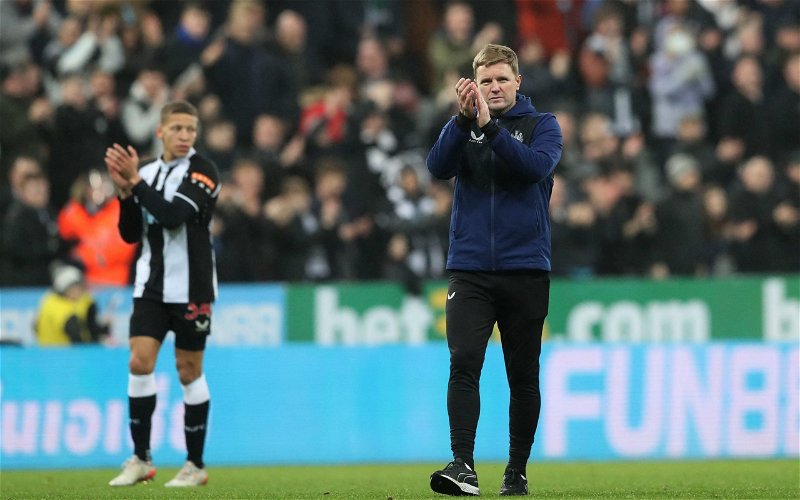 Dwight Gayle will be made available for sale once Newcastle United have enough resources in place, according to The Athletic.

Following the £25m signing of Chris Wood, Eddie Howe has a number of options going forward, albeit Callum Wilson is currently injured.

Wood and Wilson, two of the better strikers in the Premier League’s bottom half over the last few years, do offer options when fit and the likes of Allan Saint-Maximin, Ryan Fraser and Joelinton all offer alternatives.

That’s not to suggest there can’t be an improvement on that – particularly with Joelinton moving into midfield recently – but Gayle was even far down the pecking order before Wood’s arrival. Handed only 27 minutes of Premier League action thus far, it’s hard to see a way in which he fits into the team.

The likes of Nottingham Forest and former club West Bromwich Albion have been linked with moves for the 32-year-old.

Given his record in the Championship (59 goals in 100 games), Gayle does represent an obvious target for teams looking for promotion. Still, at his age, any investment would be a short-term one.

On that point, Alan Nixon of The Sun has previously suggested his wages could cause a problem when it comes to finding a buyer.

What has Eddie Howe said about Dwight Gayle?

Speaking back in December, Howe said of the striker (via The Chronicle): “What I have seen is someone who can certainly score goals, is a brilliant finisher.

“I think he’s got real competition, because I think Callum [Wilson] and Dwight are very similar players, in a sense that they both lead the line.

“So it’s great to have two experienced players in that position, and two players who certainly know where the goal is.

“So Dwight will have an important role.”