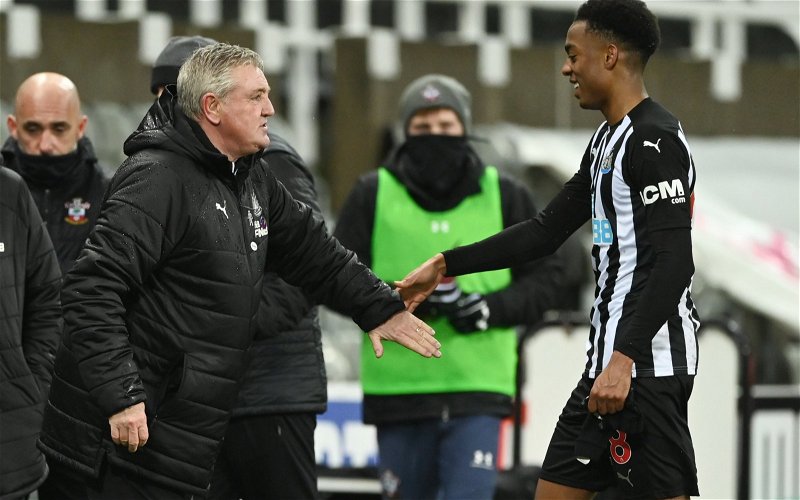 Joe Willock has told teammates that he would like to stay at Newcastle United, according to Football Insider.

While there isn’t thought to be a permanent option included in the loan deal that brought him to St. James’ Park from Arsenal in February, The Athletic did suggest Steve Bruce would be keen on another season-long temporary arrangement this summer.

For his part, the player is said to have ‘expressed an interest’ in staying on Tyneside on a permanent basis as he doesn’t think he’s got much in the way of a chance of first-team football in North London, especially if Arsenal try and sign Real Madrid’s Martin Odegaard this summer. However, the report also reveals that there are doubts about how much money Bruce would have available to him if the club aren’t taken over.

Middlesbrough manager Neil Warnock recently suggested the England U-21 international could go for as much £20m when speaking to Teesside Live.

Indeed, he did only recently pen a new ‘long-term’ deal at a Premier League giant and has made a big impact at the top level, scoring three times to help rescue Newcastle from the relegation battle, though there is of course still some way to go on that front. At the moment, he is rated at £14.4m by Transfermarkt.

Following the dramatic win over West Ham United last weekend, Bruce spoke of his admiration for Willock and suggested he was the kind of player he’d like to build the club around.

“We would love to keep him here. He is the type of player you’d love to build your club around,” he said as reported by Lee Ryder on Twitter.

“Whether we can or not I’m not quite sure.”

Clearly, Willock is capable of making an impact at St. James’ Park and, at 21, he has his whole career ahead of him.

While it may be a somewhat cynical view, he would also come with significant sell-on potential too, which would surely appeal to the current hierarchy at Newcastle United.

The Sun claimed in February that Arsenal would be looking to sell him as part of a major overhaul in the English capital but the fact Bruce has said he’s unsure if he’ll be able to keep Willock would at least suggest Newcastle aren’t confident they can raise the kind of money required to sign him permanently.