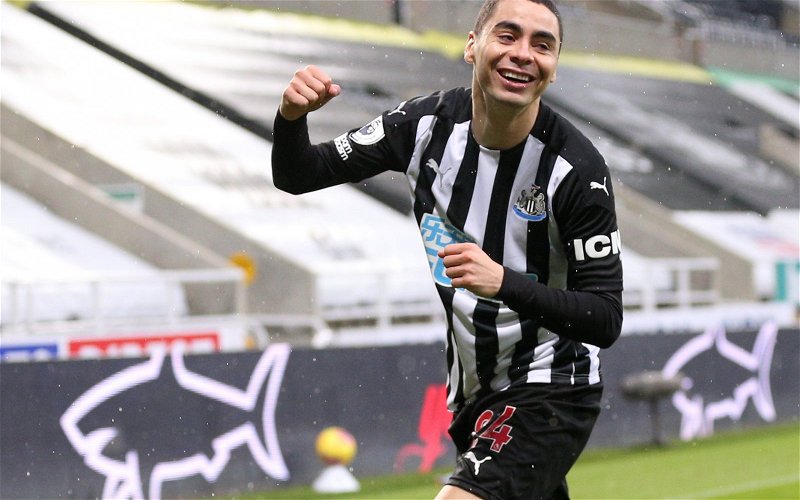 A journalist called Christian Martin has spoken about Steve Bruce’s future at Newcastle United to a Paraguayan media outlet, as well as that of Miguel Almiron’s.

Talking to Cronica, the journalist hinted that the Toon boss’ future could be far less secure than Almiron’s.

Indeed, the midfielder’s agent was recently criticised after comments made in Paraguay about the player potentially leaving St. James’ Park himself but Martin hints it could be Bruce who soon makes way even if there’s a chance Almiron could depart.

“The possibility is always there because Newcastle have controversial owners and they never want to spend,” he said when asked about the possibility of a transfer elsewhere.

Perhaps those in Paraguay believe Almiron has been unfairly treated given some of the criticism that has come his way since joining the club from Atlanta in January 2019.

Still, it’s not as if he’s been pulling up any trees – registering only 15 goal involvements in 75 games – even if he’s not currently playing in a side noted for their attacking prowess.

Aside from the Bruce situation, Martin’s claim that the ‘possibility is always there’ in regards to the 26-year-old leaving the club are interesting.

Given his agent suggested the likes of Atletico Madrid were keen on him, perhaps his camp are angling for a move if Newcastle don’t begin to show more ambition.

Under this ownership, that seems hugely unlikely.

Valued at £14.4m by Transfermarkt, this looks like an interesting summer for Almiron, regardless of what division Newcastle find themselves in next season.