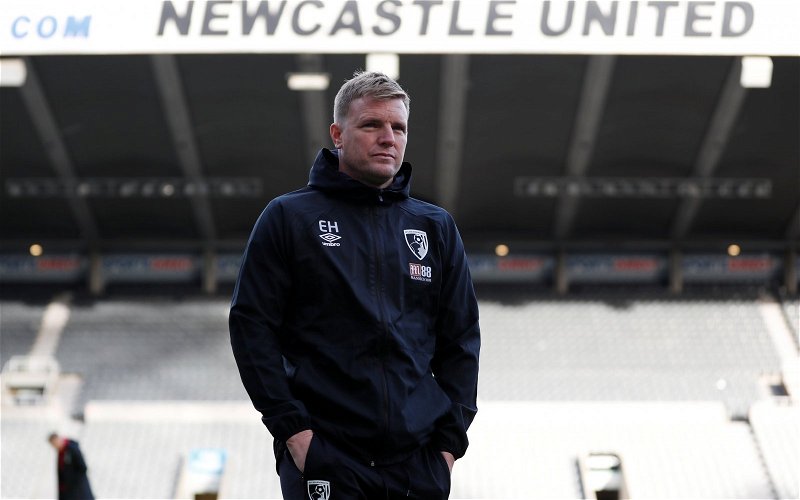 Calls for Eddie Howe to be Newcastle United’s next manager are growing on social media.

Indeed, the idea of the former Bournemouth manager moving to St. James’ Park was also something raised by the Chronicle recently as well as being discussed by Chris Sutton but, given the situation the Magpies are in right now, it’s hard to see what Newcastle can offer him or what he can offer them.

That’s not meant to do him a disservice but the one genuine relegation scrap he was involved in at Premier League level over a sustained period saw his side relegated, conceding 65 goals. That sort of open, expansive style might be an attractive idea when looking long-term but Newcastle’s backline has been seriously exploited of late, leading to a potential nightmare like the collapse against Leeds United.

Bruce is understood to want more pace in his defence which may offer an improvement in terms of playing a higher line but they’re already conceding the second-most shots per Premier League game as it is. Opening up may sound exciting but it’s a wonder if the team has the tools to do so effectively.

In terms of Howe himself, this isn’t a club going anywhere at the moment. The takeover saga has left them in limbo and the Northern Echo suggested loan additions were the only likely signings in the summer, seriously limiting any manager when it comes to looking for reinforcement.

His success on the South Coast was built on an upwardly mobile project, riding the crest of a wave and backed with significant funds in the transfer market along the way. None of that applies to Newcastle United.

This article isn’t pro-Bruce or anti-Howe. The current incumbent of the managerial hotseat has an awful lot to answer for and some of the performances rightly lead to concerns over his suitability for the role. Personally, I believe he should go but there needs to be a better plan than simply turning to an out of work manager just because he’s managed in the Premier League before.

That approach worked with Rafa Benitez but, let’s face it, Howe’s CV pales in comparison to that of the Spaniard’s. Benitez was a serial winner upon his arrival, whereas Howe is not.

Not that Newcastle require a serial winner, of course, but the point remains.

That sort of pedigree unifed a club in crisis and, as impressive as Howe’s achievements are, they aren’t of the same level.

If Newcastle were to turn to Howe, they’d need to restructure around him.

There would likely be a complete shift in the playing style (his Bournemouth side averaged far more possession than Bruce’s outfit) and that will surely take an adjustment period. Mid-season, with Fulham and Burnley putting in some impressive performances and the never-relegated Sam Allardyce in at West Brom, that is a risk.

When a squad isn’t ready for such a marked change, things can go wrong very quickly. Frank de Boer’s miserable stint at Crystal Palace after replacing Sam Allardyce is evidence of that.

Long-term, he may prove to be a good appointment. Believe me, I’m as desperate as any supporter to see a more exciting style of football produced at St. James’ Park but the complete shift during this strangest of seasons doesn’t seem feasible.