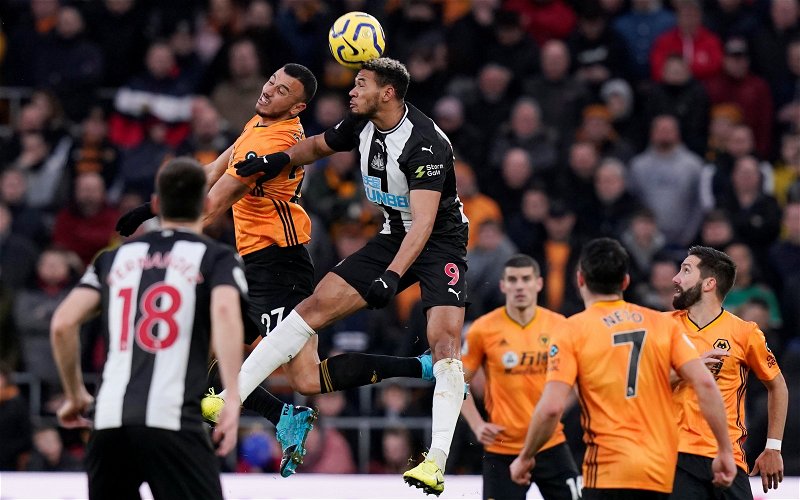 Described by the Daily Telegraph as one of the most underwhelming signings of the season, it’s fair to say Newcastle United’s club-record man, Joelinton, isn’t having the best time of things right now. Without a goal since August, the Brazilian’s performance against Rochdale in the FA Cup was met with chants of ‘you’re not fit to wear the shirt’ and his 1.5 shots per game (via WhoScored) is actually the lowest average in his recorded career.

Yesterday, the £40m man drew another blank away at Wolves, though perhaps there are some mitigating factors. Indeed, the Magpies had just 5 shots in total, managed only 35% possession and were forced into a tactical change when Dwight Gayle limped off before the break, so the idea that an isolated striker not in good form could really make all that much impact against a home side playing with three central defenders is perhaps a touch too ambitious.

In fairness, he did win the most aerial duels (4) of anyone in Steve Bruce’s team and found his target with 81.8% of his passes (the fourth-highest haul in the team), so it’s not as if he didn’t make an impact, albeit a slight one. Bruce himself said the striker should have come off with an injury, after all.

Speaking of some of the aforementioned abuse, sports journalist Ross Gregory condemned some of the talk he said he heard first-hand at Molineux by sections of the away support. Taking to Twitter, he labelled it as ‘vitriolic’ and ’embarrassing’, prompting a number of fans on the social media platform to agree.

Stood among the away crowd at Molineux. I can confirm the abuse Joelinton is getting is vitriolic and embarrassing #nufc

With that in mind, here’s a look at some of the comments.

There are 2 things wrong here:

1. The club hierarchy know nowt about football & bought a young lad from overseas with no Prem experience who is NOT a striker & play him up front, no wonder he’s struggling to score goals.

2. Some of our fans are thick as mince. #NUFC

Honestly what more could Joelinton do today. The abuse is ridiculous

We need to get behind him while he’s here

“We’ll support you ever more!”

You could play Ronaldo alone up front against 3 big defenders and have the rest of his team 40 yards away and he’d struggle . Joelinton is not and never will be an out and out goal scoring number 9 . Blame the club for thinking he is

How did you rate Joelinton’s performance against Wolves? Join the discussion by commenting below…