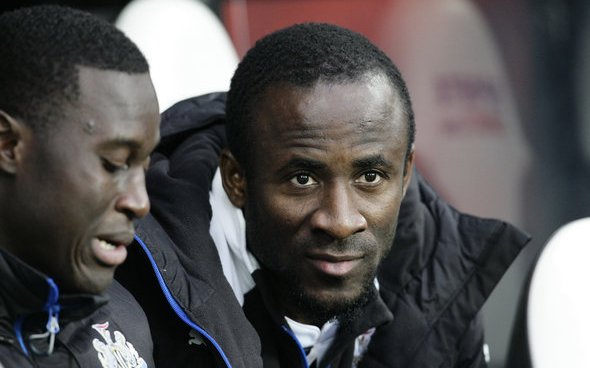 Former Newcastle United striker Seydou Doumbia has heaped praise on his old Magpies boss Steve McClaren, saying it was ‘a pleasure’ to work with him.

The Ivory Coast international joined the north east giants on loan from Roma in January 2016, but failed to score and only made three appearances in a black and white shirt.

Despite that, he loved McClaren: “Because the coach changed quickly, simply because of that,” Doumbia told The Chronicle when asked to explain his struggles on Tyneside.

“It was a pleasure to work with Steve everyday, I got a lot of joy from it but unfortunately he left us quickly. Like I say, I was not 100% when I arrived at Newcastle, and the fact that the coach changed very soon didn’t help me.”

McClaren is much-maligned on Tyneside, and that’s no surprise. He is largely the reason behind the club being relegated during the season he was in charge, with even a world class head coach like Rafael Benitez failing to keep them up. McClaren’s recruitment during the summer he was in charge left much to be desired, and he simply couldn’t get a tune out of the majority of his players. He was the one who was in charge when Doumbia arrived, but the former England manager lost his job shortly after that. Benitez came in and the Ivorian didn’t really get a sniff. So that’s how Doumbia explains his struggles at St James’ Park. He obviously liked McClaren, though, which is a bit of a rare thing in Newcastle. How badly McClaren did with the Magpies was part of the reason why Steve Bruce’s appointment last summer was met with such vitriol. He seemed a carbon copy of the lazy appointment that McClaren represented, and we all saw how that ended up. Bruce seems to have started, at least, much better than his fellow Englishman, though.