The Magpies were humiliated in a dreadful 5-0 reverse at the King Power Stadium, and Ryder believes the Toon boss has had enough of certain players.

“What I will say is that Steve Bruce has been quite fair with one of the players about contracts, and I think he’s been very open since he got here,” he told The Chronicle. “And I think his patience, it snapped on Sunday a little bit.

“There’s a couple of little things behind-the-scenes that has gone on, where he’s given certain characters the benefit of the doubt. That patience is starting to run out now. It’s alright cutting players a bit of slack, but when they go out and do that on Sunday, that’s when he flipped.” 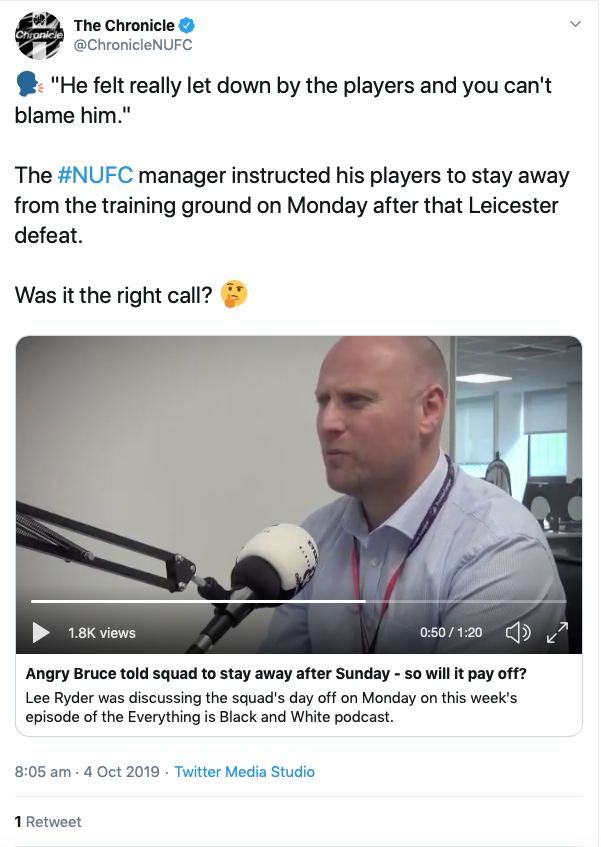 You can completely understand why Bruce will have been left seething after Sunday’s game. He’s obviously given some players a chance, as Ryder says, and feels that they have abused his trust after the Foxes clash. Who could Ryder be referring to? Perhaps someone like Emil Krafth who was surprisingly brought back into the team at right back ahead of Javier Manquillo, or maybe Miguel Almiron who has yet show why he’s considered an automatic starter in this Newcastle team? Then there’s midfield stalwart Isaac Hayden, who left his team with 10 men after a reckless challenge on Leicester star Dennis Praet. It would be interesting to know the specific behind-the-scenes goings-ons that Ryder is referring to, here. It looked like he was a wondering how much to divulge there or how to word what he was saying, so it certainly seems as if there is more than meets the eye going on at St James’ Park these days.