Steve Bruce is predicted to change his formation and make three changes to his starting line-up ahead of Newcastle United’s clash against Manchester United at St James’ Park on Sunday.

Newcastle suffered a humiliating 5-0 defeat at Leicester last week when Bruce opted to ditch his usual back-three in favour of a back-four.

It is likely that the former Sunderland boss will revert to his usual formation this weekend to take on Ole Gunnar Solskjaer’s out-of-form side, and that could lead to a few changes also being made.

DeAndre Yedlin could make his first start of the season at right-back in place for Emil Krafth after the USA international came off the bench in the defeat at the King Power. Yedlin’s pace in the wing-back area could prove to be a useful tool as Newcastle aim to provide an outlet when trying to launch counter attackers against the Red Devils.

Federico Fernandez might also earn his first start of the Premier League campaign at centre-back as Paul Dummett is likely to start as the left-sided wing-back due to injuries to Jetro Willems and Matt Ritchie. A change of formation would mean that Japanese forward Yoshinori Muto could be axed for Fernandez to come in.

Isaac Hayden is suspended so Ki Sung-yueng is predicted to replace the ex-Arsenal midfielder in the centre of the park. 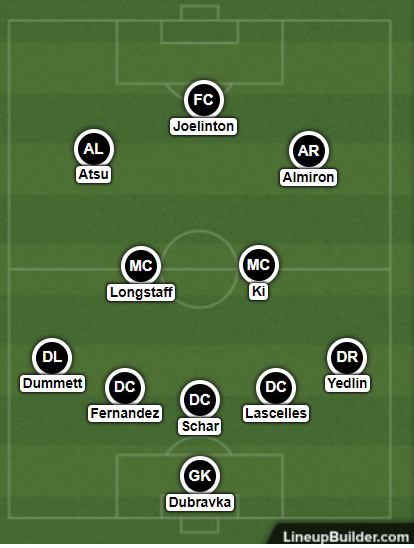 Martin Dubravka is expected to start in goals with a back-three of Jamaal Lascelles, Fabian Schar and Fernandez ahead of him with Yedlin and Dummett lining up on either side as the two wing-backs.

Ki could come in and start alongside Sean Longstaff in the centre of the midfield.

Bruce’s attack is likely to be without Muto on Sunday but Miguel Almiron and Christian Atsu are still predicted to start in support of centre-forward Joelinton.