Newcastle United head coach Steve Bruce has confirmed that young Magpies midfielder Matty Longstaff is in ‘with a chance’ of starting against Manchester United on Sunday.

The 19-year-old has played just 90 minutes so far this season, in the Carabao Cup defeat to Leicester City [Source: Transfermarkt], but seemingly could well come into the team at St James’ Park.

Midfield stalwart Isaac Hayden is suspended after his sending off against Leicester City last time out, and Bruce has intimated that the younger Longstaff could profit.

“Yes, he has been in with a chance since I walked through the door,” Steve Bruce said at his pre match press conference, as per journalist Lee Ryder’s personal Twitter account, when asked if the teenager had a chance to start on Sunday. 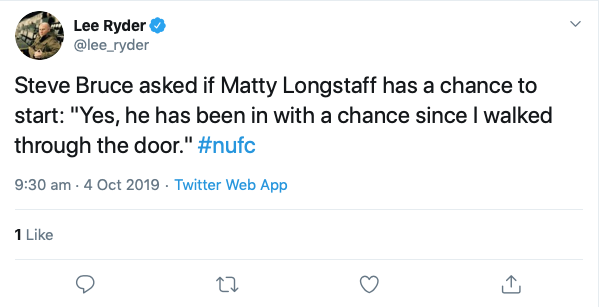 This will be music to the Newcastle supporters’ ears. With Hayden out, it’s a chance for Bruce to mix things up a bit and go for something different. He could bring fit-again Jonjo Shelvey back into the side, of course, or he could call on veteran midfielder Ki Sung-yueng to fill the Hayden-sized void on Tyneside. However, he could be bold and go for an all-Longstaff partnership in the centre of midfield. The youngster was hampered by being played out of position on the wing against the Foxes, and it showed in his uncertain performance. The statistics show that he was snatching at things a little bit. As per WhoScored.com, Longstaff only made 25 passes with a disappointing success rate of just 72%. Furthermore, he failed to have a shot, produce a key pass and he had two unsuccessful touches of the ball. However, you never know how it’s going to go when you put a youngster in, and Longstaff could provide just the spark that this Newcastle side need against the Red Devils.