Ritchie set to return against Arsenal

If you would have told Newcastle United fans at the beginning of June that their squad would look like it is now going into their Premier League opener against Arsenal, they would have most likely have laughed.

Steve Bruce has kept a core of familiar faces that played so well under Rafael Benitez and added some fresh faces to bring new optimism to St James’ Park, with many not sure what to expect.

Despite the arrivals of Joelinton, Allan Saint-Maximin, Andy Carroll, Emil Krafth, and Jetro Willems – Newcastle have managed to keep hold of influential figures such as Jamaal Lascelles, Fabian Schar, and Martin Dubravka.

Experience is always a key attribute that can help any side excel in the Premier League, and players such as Jonjo Shelvey and Matt Ritchie add that much-needed steel.

Ritchie himself was a doubt for the season opener on Sunday after suffering a hamstring injury in pre-season against Hibernian, but Shields Gazette journalist Miles Stanforth stated on his personal Twitter account that the Scotsman is set to be ready barring any last-minute hiccups.

Matt Ritchie will be in squad for Arsenal on Sunday as long as he doesn't suffer a setback. He returned to training this week after recovering from a hamstring problem. #nufc

With his return to the fold, Newcastle fans will no doubt expect to see him from the off – even if they secured a loan-move for Willems in the final week of the window.

Comparing the two’s stats via WhoScored, it is clear to see that the Dutchman suffered from his own injuries last season, which seriously hampered his form and playing time. 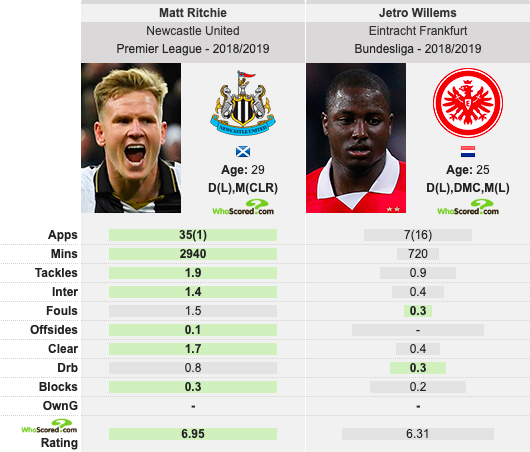 The 29-year-old averaged significantly more tackles, interceptions, and clearances last season – which could be down to the fact Frankfurt enjoyed a season in the top half of the Bundesliga last season.

Ritchie also secured a much higher average match rating, with Willems struggling to make an impact consistently due to 16 of his 23 appearances being off the bench. 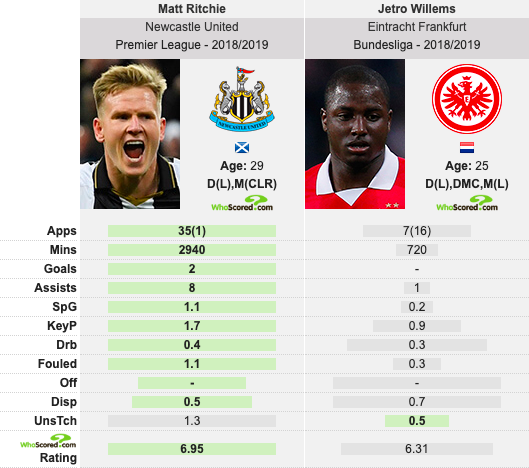 Ritchie was also better in attack, averaging more shots, key passes, and completed dribbles in each game he played – stats which led to him being involved in nine more goals.

Newcastle need to use the proven Premier League man and make Willems wait for his first taste of the English top-flight.