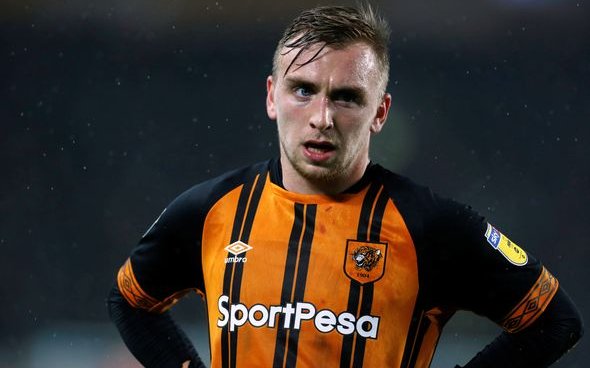 Newcastle United could seal a masterstroke if they sign Jarrod Bowen this summer after the Hull City forward was linked with a move to St James’ Park.

According to the Chronicle, the 22-year-old has been mentioned as a potential target for the Magpies before the start of next season as Steve Bruce aims to add more options to his attack.

It is understood that Bowen would cost Newcastle over £10million if they wanted to sign him with Hull admitted that there is interest in their star player.

Bruce managed Bowen during his time in charge of the Tigers and after several years of developing on Humberside, the ex-Hereford ace had the best season of his professional career in the Championship last term.

Bowen made 46 league appearances for Hull in the 2018/19 campaign, scoring 22 goals and supplying four assists.

He went through a spell between December and early March which saw him score 13 goals in 13 games, bagging braces against Leeds United and Bruce’s former club Sheffield Wednesday in the process.

According to stats by WhoScored, Bowen averaged 2.5 shots per game, 1.4 successful dribbles and 0.6 successful crosses for Hull in the Championship last term, showing that he is someone who loves to cut inside from the right-wing and get shots at goal while also having the ability to feed balls into the striker.

Newcastle could do with signing a new winger or two, especially as their current options are rather underwhelming.

Christian Atsu and Matt Ritchie are two of the wingers currently at St James’ Park but the latter spent parts of last season playing as a left-sided wing-back.

Rolando Aarons and Jacob Murphy are also in Bruce’s newly-inherited squad but both of them spent the second half of last season on loan in the Championship and seem unlikely to make any difference in the upcoming Premier League campaign.

Signing Bowen would be a major boost to Bruce’s attack.

The Leominster-born forward was in top form last season and for just over £10million, would make a huge impact in the side under Bruce’s leadership.