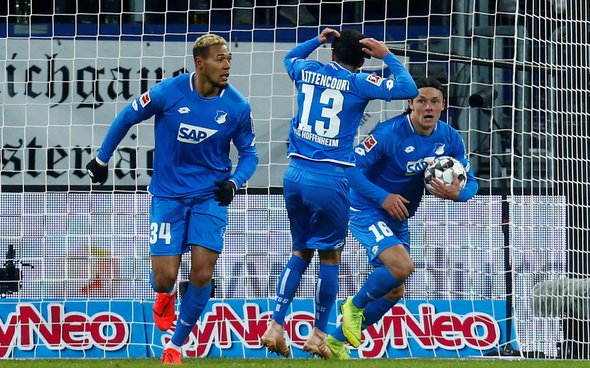 Mike Ashley needs to open up his chequebook and fund a big-money move for Newcastle United to sign Hoffenhaim striker Joelinton in the summer amid a report that West Ham are also interested in the Brazilian.

According to Italian news outlet Calcio Mercato, Newcastle’s Premier League rivals are in the hunt to sign the 22-year-old striker, who has been in red-hot form this season at Hoffenheim.

Joelinton spent the last two seasons on loan at Austrian giants Rapid Vienna before returning to the Bundesliga club in the summer.

He has since scored 11 goals and supplied nine assists in 32 appearances in all competitions for Hoffenheim, with some of his goals coming against the likes of Borussia Dortmund, Bayer Leverkusen and Champions League group stage opponents Lyon.

It is no shock to see clubs in the Premier League being interested in Joelinton, and Newcastle have already been linked with the former Brazil youth international themselves.

The People claimed in their print edition (Sunday March 24, page 47) that the Magpies are “keen” on signing the Hoffenheim forward, but he is valued at a staggering £40million.

West Ham would more than likely be willing to spend that kind of money, especially as they spent around £100million last summer and Marko Arnautovic has been linked with leaving the London Stadium.

Newcastle owner Ashley splashed the cash to sign Miguel Almiron in a club record deal in January and if he wants to ensure that Rafa Benitez pens a new deal at St James’ Park then he needs to sign Joelinton.

Salomon Rondon turns 30-years-old in September and might not be brought back from West Brom when his loan deal expires at the end of this season.

Joelinton is young, is someone who is reportedly interesting Benitez and is starting to show the signs of a very clinical centre-forward.