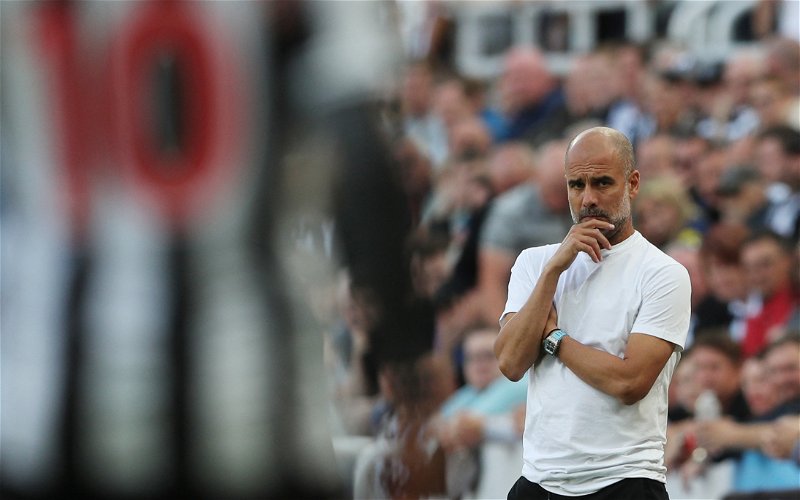 Pep Guardiola has backed Newcastle United for a title challenge.

Eddie Howe’s side are two points behind Manchester City and seven points off Premier League leaders Arsenal heading into New Year’s Eve’s clash with Leeds United and the Newcastle boss himself has refused to rule out an unlikely push to win the title.

Newcastle have already taken points off of champions City and head to the Emirates Stadium on Tuesday full of confidence having undoubtedly proven one of the best teams in England over the past year. Indeed, while Arsenal have clearly improved since, the same could be said of Newcastle, and Howe’s team beat them with relative ease back in May.

Clearly, there’s a long way to go in the season and it’s important not to get too carried away. Still, it seems Guardiola will not rule Newcastle out as he plots to win a third successive League title with City.

What has Guardiola said about Newcastle?

Speaking at a press conference on Friday, Guardiola said (via the Press Association): “Newcastle is there and nobody expected it.

“I don’t know what’s going to happen but if they continue to play with this consistency they can do it, of course they can do it.”

Can Newcastle win the Premier League?

It’s undoubtedly a huge ask and of the three teams, Newcastle would clearly have to be considered rank outsiders at this point.

Still, Howe has built a team capable of competing with the top sides even in this relatively early stage of their development and one who simply do not concede goals. They boast the best defence in the Premier League and that looks sustainable, given they allow only 10.9 shots per goal on average (via WhoScored), the fifth-lowest in the division.

Indeed, their good form stretches back so far now it would surely be considered something far deeper than just a purple patch.

With Newcastle still to see the best of Alexander Isak and Allan Saint-Maximin too, there’s plenty of reason to believe things will only get better from here.

Tuesday’s trip to Arsenal will tell us exactly where this team are.