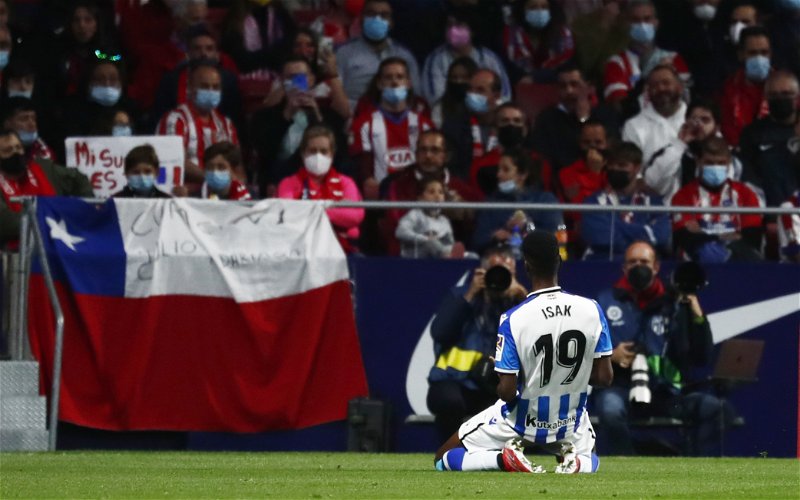 European football expert Andy Brassell believes Alexander Isak is “exactly the sort of player Newcastle should be going for” and “should be scoring 15-20 Premier League goals”.

On Friday, the club announced the record-breaking signing of the Sweden international.

After a summer-long pursuit of a new forward, Isak arrives for a fee of around £60m and The Athletic suggest the 22-year-old has signed a six-year deal, a contract that puts him amongst the club’s highest-earners without breaking the wage structure.

Thought to have been a target for a number of months, the signing represents a real coup for United. Previously linked with the likes of Arsenal and Liverpool, Isak’s age profile means it is a long-term addition, with the player already boasting a significant amount of top level experience.

While the likes of Guillem Balague have spoken of the player’s need to score more goals, Brassell tipped Isak for success.

What has been said about Isak?

Speaking on Thursday’s episode of the Football Ramble’s On the Continent Podcast, Brassell said (46:24): “For me, he’s exactly the sort of player that Newcastle should be going for.

“Someone who can play with or instead of Callum Wilson, someone whose best years are ahead of him rather than behind him. We know Premier League clubs have to pay over the top for potential – that’s fine, they can live with it, they’ve got the money.

“I think with him, you look at the personality to take control of a game, especially as a centre-forward and especially at that age. He won’t wait for the stuff to happen, he makes stuff happen.

“He’s a good creator, he’s good on the ball, he’ll get behind teams and make goals for his teammates.

“I think if there’s one thing, an area in which he needs to improve, he needs to be more consistent in front of goal. I think a player like him should be scoring 15-20 Premier League goals going forward in a season, as well as creating others for his teammates.

What has Eddie Howe said about Isak?

Speaking to the club’s official website, Howe said: “I’m very excited that Alexander has chosen to join us. He is an outstanding talent who is capable of making a big contribution to the team.

“He is technically very good, with a mix of attributes that will complement us, but he is also at a great age to grow with this club.

“I want to thank the club’s owners and transfer committee for bringing Alexander to Newcastle. We are all delighted to have him on board.”