Newcastle United head coach Eddie Howe has stressed that money is not the sole reason behind their stunning turnaround in form.

The former Bournemouth manager has been nominated for the coveted Premier League Manager of the Season award, alongside Pep Guardiola, Jurgen Klopp, Thomas Frank and Patrick Vieira.

No team had ever retained their top-flight status in the Premier League from the position in which Howe took over in November, with Steve Bruce’s replacement yielding a huge amount of improvement from the players he inherited.

Of course, the money spent over the course of the January transfer window cannot be ignored, although it doesn’t tell the whole story. Bruno Guimaraes did not even start until his sixth game as a Newcastle player, while Kieran Trippier’s foot injury saw him ruled out for months after only four appearances.

As a result, the players already at the club – many of whom had drifted under Bruce – had to step up. Fabian Schar, Ryan Fraser, Joe Willock, Emil Krafth and Joelinton have all made telling contributions under Howe and, without them, who knows just where Newcastle would be.

Some have suggested the money spent in January should be taken into account when judging Howe’s work but, speaking ahead of Monday night’s game at home to Arsenal, the 44-year-old stressed it wasn’t the sole reason as to the team’s improvement.

What did Howe say about Newcastle’s spending?

“The easy thing is to talk about money. It is not what has got us here,” he said (via The Northern Echo).

“January helped massively and the money helped the team, and the players who came in made a huge difference. But I don’t think it was the reason we did very well.

“You look at the St James’ Park atmosphere again, a crowd in a place where they are proud of the team and seeing a team giving everything to try and win a game. 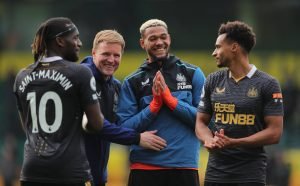 “It has been great to see and experience. It has been electric and the crowd has helped us get points. A key part of the future is to try to keep that dynamic as strong as it is now.”

Of the players to have improved under his watch, Howe was keen for those individuals to get their praise.

“I want the players to get the credit for their performances. The team has come together and fought for every point, and I don’t think money gives you that.”