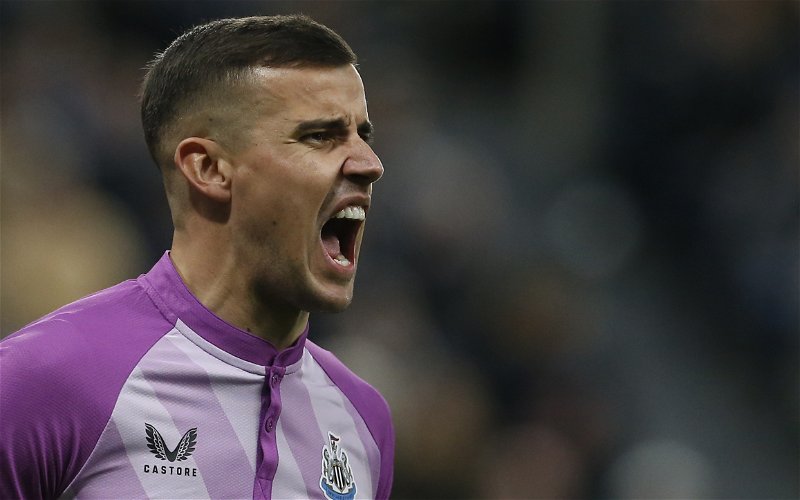 Karl Darlow could be afforded the chance to link-up with Steve Bruce at West Brom should Newcastle sign another goalkeeper this summer, according to The Sun.

Ahead of a big summer on Tyneside, a number of goalkeepers have been linked with a move to St James’ Park.

Brighton’s Robert Sanchez – supposedly top of the wishlist – along with Kasper Schmeichel, Thomas Strakosha and Dean Henderson have all been mooted as targets as Eddie Howe looks for cover and competition in equal measure for Martin Dubravka.

While the 33-year-old has long been established as Newcastle’s first-choice ‘keeper, neither Darlow (despite some good form at the beginning of last season) or Freddie Woodman particularly impressed when called upon during Dubravka’s injury earlier this season.

With the club needing to sell in order to balance the books, Darlow could be farmed out on loan to West Brom, who are set to lose Sam Johnstone this summer. The 3-cap England international is thought to be close to joining Tottenham on a free transfer.

Given the fact both Darlow and Woodman rank amongst the worst goalkeepers in the Premier League for post-shot expected goals rating this season, strengthening the department does seem wise.

That metric judges how likely a goalkeeper is to save a chance based on the quality of the chance for the attacker, with positive numbers indicating an above-average ability to stop would-be goals. According to FBREF data, Woodman (-3.3) and Darlow (-3.4) rank 32nd and 33rd respectively out of 39 in the entire League, suggesting both would have been expected to save almost four of the goals they conceded.

Dubravka (+4.1), meanwhile, sits fourth in the entire division, although that is not to say the Slovakian is perfect. 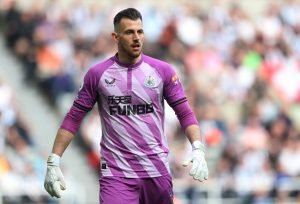 Going forward, Howe has talked about deploying a more progressive style of play and the fact Dubravka – although a very good shot-stopper – does not tend to come off his line could have an impact on any attempt to play a high defensive line. Indeed, only three ‘keepers in the entire division average fewer than his 0.33 defensive actions outside of the penalty box per game.

Someone like Sanchez, meanwhile, averages 0.86 while his distribution also beats Dubravka’s, completing 67.6% of his passes as apposed to the Newcastle man’s 60.1% (via WhoScored).

Should Howe look to bring a perhaps more modern type of ‘keeper to St James’ Park, Dubravka is an ideal back-up, while Darlow moves on.

What has been said about Newcastle’s goalkeeping situation?

“I think there’s a real question mark over the goalkeeping position going into next season, and I think in the summer, that’ll be the most interesting part of the team to look at, as to whether he will improve the goalkeeping department.”