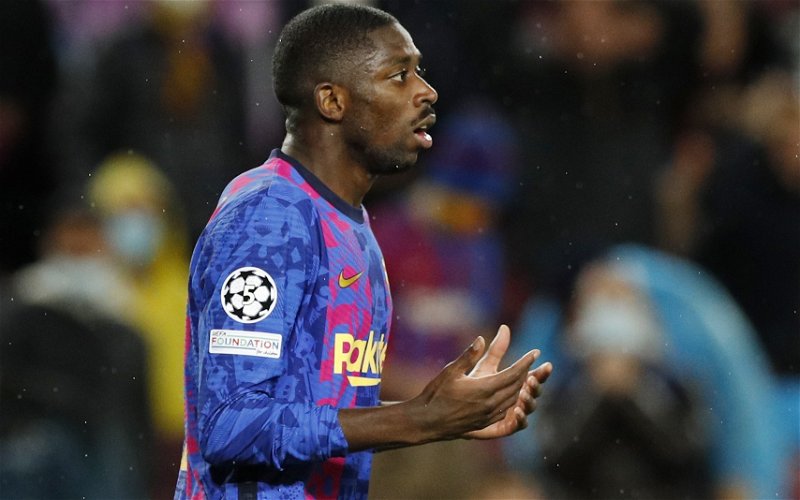 Fabrizio Romano has revealed Newcastle United have enquired about Barcelona’s Ousmane Dembele while speaking on the FIVE YouTube channel.

Rather bizarrely, given Newcastle’s lowly position and deep problems in defence, the Frenchman has long been linked with a move to St James’ Park.

Indeed, Foot Mercato suggested the club had made a huge offer to bring the player to St James’ Park as he comes towards the final few months of his contract. For his part, Barca boss Xavi Hernandez has publically stated he wants the club to extend Dembele’s contract.

One of the most expensive players in the history of the game, Dembele has struggled to live up to the hype.

Despite scoring 30 goals and registering 21 assists in 151 games for the club, the 2018 World Cup winner has consistently struggled with injury and there have been suggestions his professionalism hasn’t always been exemplary.

Clearly, this would be an exciting signing given the levels he’s shown before. During his time at Borussia Dortmund, he was considered as one of the most exciting young players in the world and, having won trophies with both Barcelona and the French national team, is certainly the kind of player Newcastle couldn’t have possibly dreamed about signing during the Mike Ashley era.

Still, he’s not without his baggage. Writing in The Guardian in 2018, journalist Sid Lowe said: “The 21-year-old has appeared disengaged and immature at Barça – but he has a habit of scoring when it matters.”

What did Fabrizio Romano say about Ousmane Dembele and Newcastle?

“He wants a super big deal, a super big new contract and this is why Newcastle is enquiring about him,” he said from the 8.33 mark onwards.

“So to go into this process, to do an official proposal, they will need something else. They have some intermediary working around the club, that is speaking with people close to Dembele, so it’s true that they have an interest.”