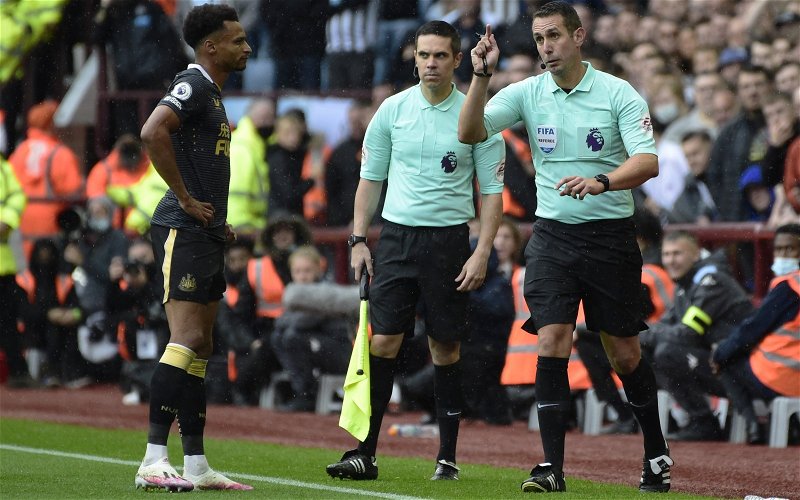 Former head of the PGMOL Keith Hackett has suggested Steve Bruce could be in line for a visit from current boss Mike Riley if he continues to lament VAR while speaking to Football Insider.

So far this season, Newcastle United haven’t had much luck on the VAR front.

Indeed, ESPN recently calculated that Bruce’s side had suffered the highest number of decisions against them in the first three games of the Premier League campaign with penalties awarded for West Ham United and Southampton at St James’ Park, as well as away at Aston Villa.

In total, four calls have negatively impacted the team this season, double than for Leicester City who lie second in the calculations.

Bruce did lament it following the loss to Villa in August saying: “The big decisions went against us. With the offside decision, I didn’t think we were looking at lines for armpits any more.

“Lascelles’ foot is above his head so if your foot is above your head, you’ve got to put your hands up. I’m disappointed with VAR because that’s two or three big decisions that have gone against us that have proved costly,” he added (via The Independent).

What did Keith Hackett say?

“I don’t think there is anything untoward,” he said.

“If Bruce has got his complaints, he’s got every right, but then Mike Riley may visit him.

“That’s his role. That’s how I used to deal with things when there was some concern.

“I would have taped the games, taken the video and then gone and seen them.

“I think in the third week of the new ‘lighter touch’ scenario, there were some incidents where VAR didn’t come in when I thought it should have.

“We have given them some leeway in the opening stages because of the ‘lighter touch’ rule.

Do Newcastle have a right to complain?

Aside from the dubious penalty awarded in the first game of the season at West Ham, not hugely, although the trip to Villa Park was frustrating.

Even without that, the away side managed to rip through a Newcastle team with ease when hitting them on the counter and, frankly, were good value for their win. Against Southampton, the fact that Bruce’s side can’t see out a home game after scoring themselves in the 90th minute is far more of a concern than any VAR-related nonsense.

Last season, Newcastle weren’t subjected to much VAR controversy. That luck runs out.

The team has to improve.