News: Joelinton might be a problem cost for Newcastle United 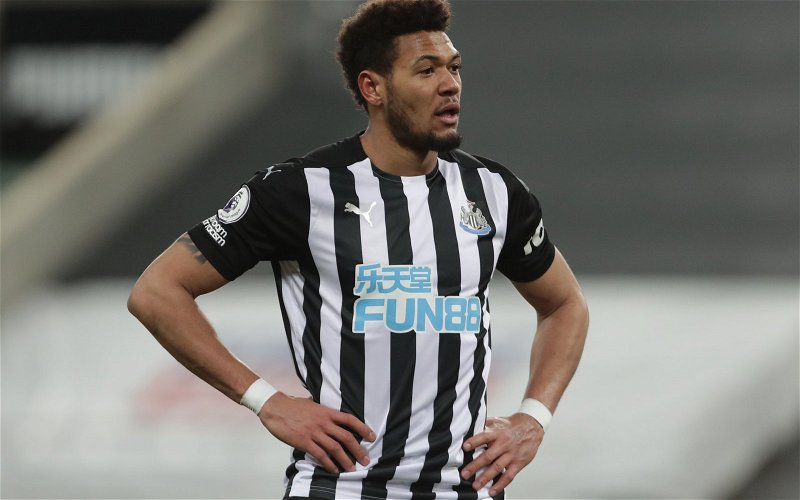 Football finance writer Kieran Maguire has suggested it might be difficult for Newcastle United to sell Joelinton.

Speaking to Football Insider, Maguire revealed the Brazilian was a ‘problem cost’ for potential investors in the club while hinting other clubs may have been put off by his performances since moving to Tyneside in 2019.

“The elephant in the room is the Joelinton factor. Who’s going to sign him given that he’s not delivered for two seasons,” he said.

“You’re inheriting a problem cost which you won’t have to the same extent at Derby [County amid their takeover reports]. There is more flexibility with them.”

Given the 24-year-old has only scored seven times in seventy-one games in black and white, it’s easy to see why that would be the natural assumption.

Still, while not to overlook a number of poor performances and missed chances, he is playing for a side coached by a manager in Steve Bruce who has been frequently questioned for his tactical prowess. Throw in the fact he’s largely been played out of position – with a school of thought emerging that he is naturally suited to a wider role rather than as a number nine – and it’s not as if the environment has been conducive to bringing the best out of him.

According to WhoScored data, only two Newcastle players (Callum Wilson and Jonjo Shelvey) average more than his 1.4 shots per game and only three players (Allan Saint-Maximin, Joe Willock and Jacob Murphy) complete more in the way of successful dribbles. Though not exactly groundbreaking or what people had in mind after his £40m move, it’s not as if his underlying numbers are that bad, other than his finishing.

Even in front of goal, UnderStat note he is only just over a goal (+1.18) over his xG, suggesting the quality of chances offered to him this season should have resulted in around two goals, rather than the one he has managed.

It’s hard to imagine Newcastle getting anything close to the £40m they paid for Joelinton (valued at £15.3m by Transfermarkt these days) and he is certainly not exempt from criticism but his underlying statistics may still prove reasonably promising to potential suitors.

If Newcastle are going to give up this experiment, hopefully he gets a move that can bring the best out of him.