News: Callum Wilson explains what has been difficult and frustrating at Newcastle 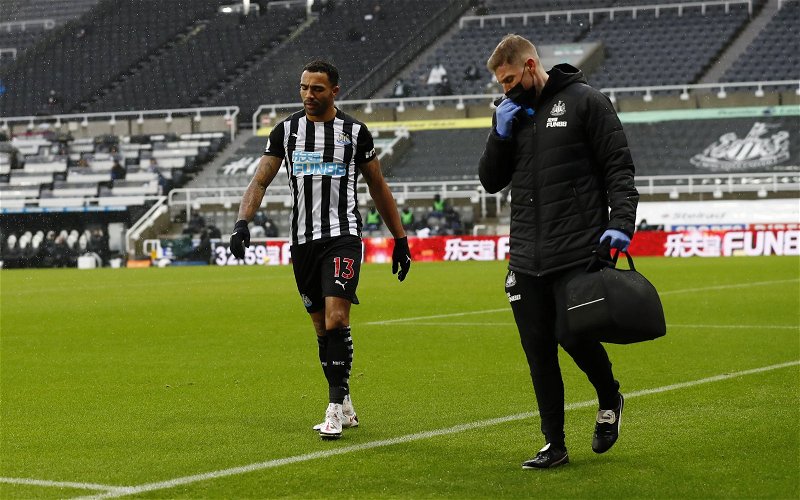 Newcastle United striker Callum Wilson has admitted it has been ‘difficult’ and ‘frustrating’ watching his side struggle without him though he did stress the need for togetherness.

Speaking to the club’s official media channel posted on Twitter as he is put through his paces on Tyneside, the 29-year-old revealed he had been watching and shouting from his seat within St. James’ Park the other night, presumably against Wolverhampton Wanderers.

Back in the North East after reportedly undergoing intense triple sessions at a bespoke training camp down in Bournemouth, Wilson spoke of the difficulty watching from the sidelines brings.

“It’s been difficult because I’m a player, I’m a fan, I get emotional like everybody else,” he said.

“I think I was in the stadium the other night shouting away, probably the only fan in there people could hear to be honest.

“For me, it’s been difficult, it’s been frustrating with the results and things like that but we’re together as a team.

“We win together, we lose together. When I’m around the place all I can do is be positive for the boys.”

Of strikers playing in the bottom half of the Premier League, only Patrick Bamford has scored more (1o to 13) than the £20m signing and only seven individuals across the whole division have been directly involved in more goals than him (15). According to FBRef data, only Allan Saint-Maximin in Steve Bruce’s side offers more goal-creating actions (which not only includes goals and assists but also dribbles and fouls drawn that lead up to the ball hitting the back of the net) than the England international.

Having reasserted his commitment to the club by announcing he did not regret moving to St. James’ Park over Aston Villa, it’s great to see him working his way back to fitness and acting as support off the pitch.

Considering the reliance Newcastle have on him, he could make himself a hero by firing in the goals to keep the club in the Premier League.