Opinion: A goal without a plan is just a wish 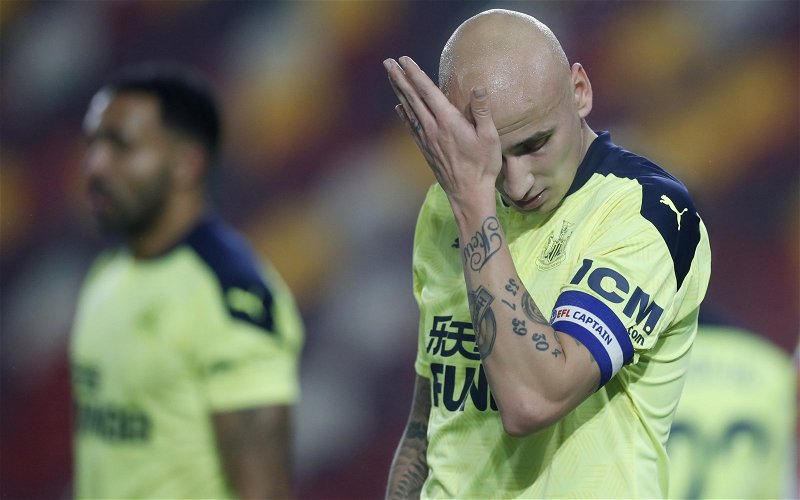 Following the latest miserable Newcastle United result as Brentford progress into the semi-finals of the Carabao Cup, it’s getting easier to come to the assumption that playing for this club just isn’t much fun.

Simplistic perhaps but the soul-sapping style of play deployed by Steve Bruce, who seems to think of his team as a counter-attacking one (hint: they are not), doesn’t lend itself to any sort of sustained enjoyment. Sure, you might get the odd smash-and-grab win (you’d hope so given the Magpies’ squad is valued at a collective £245.1m by Transfermarkt) but there is so little in the way of an obvious tactical identity that it is a wonder what goes on at the training ground all week.

Supporters won’t need reminding how bleak the club’s trip to West London was. While Callum Wilson did have a few half-chances, it was the Championship side who looked better throughout despite making six changes with half an eye seemingly on their exciting promotion push.

Brentford triumph 1-0 #nufc bow out in farcical circumstances against a weakened Bees side. Absolute shambles.

The goal was obvious: reach a first semi-final in 5, 728 days. The plan to get there: lost on the trip down to the capital it seems. Indeed, at times last night, it seemed more plausible that a ghostly Victorian-era highwayman robbed the team bus of such a blueprint en route than imaging one was ever drawn up at all.

A goal without a plan is just a wish, said French writer Antoine de Saint-Exupéry. Oh how welcome even something as abstract as a wish would be at the moment.

Clearly, it’s not as easy as simply beating a side lower down in the footballing period than you and respect must be paid to the work Thomas Frank has done with Brentford but at some point you do have to have some sort of confidence. They rested six players for crying out loud.

Thought that was inexcusable. How much longer are we going to be told #nufc a work-in-progress? They're getting worse, not better. Brentford – with six changes – just superior in every department.

What is football supposed to be? Fun. Look at Leeds United, another of English football’s Northern powerhouses, who have embraced the charm and style of a manager who has rarely looked like winning trophies in almost a decade.

What are Newcastle United? The polar opposite.

This is an article aimed at fans directly. We’ve seen the performances. We know how pundits are likely to react when frustration amongst supporters swells on social media.

What we do not know, is what on earth is going on behind the scenes.

Newcastle exit #CarabaoCup quarter-finals in limp fashion – to a Championship club's reserve side.

No reaction whatsoever after falling behind. Pathetic, really.

Really feels like the negative momentum could now build for Bruce & #NUFC.#BRENEW

Attacking? Certainly not, they muster the fourth-fewest shots on target per Premier League game. Defensive? Nope, they allow the second-most shots against them of anyone in England’s top division. Going back to Bruce’s assessment that his side like to hit teams on the counter, the proof against that particular theory is equally as bleak.

Only one of their goals during this campaign so far has come from that tactic and The Athletic noted last month that Newcastle were the side who progress the ball the shortest distance up the pitch when in possession, amongst an array of other equally as miserable statistics.

Commenting on Twitter last night, Miguel Delaney described life at Newcastle right now as ‘existence football’ which seems like the best way of summing the situation up. Do just enough to keep your head above the water long enough and the need to get to the shore seems a lot less urgent.

The problem with that, of course, is you may forget what actually living is like. If Newcastle haven’t done that already, last night won’t have helped spark any such memories.