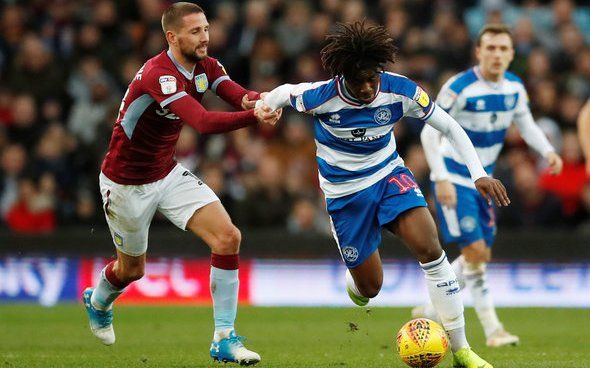 The latest reports to emerge suggest that Crystal Palace are leading the way in the race to try and sign Queens Park Rangers midfielder Eberechi Eze. The Eagles have reportedly had a bid of £12m rejected for the Championship star, and the R’s are hopeful that one of the Premier League sides in the running for Eze will match their £20m valuation.

Further talks have been held with QPR since their initial bid was rejected and West Ham United have also been in contact with Mark Warburton’s side, reportedly offering striker Jordan Hugill – who spent the season on loan at the Kiyan Prince Foundation Stadium – as a makeweight.

Newcastle United are interested but being left behind in the race for the England youth international and could miss out on a great deal with the player’s contract set to expire at the end of the 2020/21 season. Eze had a breakthrough campaign in the second tier, firing in 14 goals for the division’s 13th place side, making him their top scorer, despite playing as a midfielder.

Eze enjoyed a fairly fluid role under Warburton last term, with the 22-year-old primarily starting as either a left attacking or central attacking midfielder, where he started 19 and 13 matches respectively. However, Eze has proven to be astonishingly versatile, and in total last term he started in seven different positions, primarily in the engine room.

Another incredible feat the 22-year-old Englishman achieved was starting all 46 of QPR’s Championship matches. Still, he was not just making up the numbers as Eze won himself a quite incredible ten man of the match awards.

Eze experienced a breakthrough season during 2019/20, increasing his goalscoring output by ten strikes, along with playing five more assists than the previous term. The 22-year-old midfielder’s performances in the Championship have rightfully caught the attention of multiple Premier League sides, also including the newly promoted Leeds United.

Given reports do not suggest that Newcastle United have made a bid for the second-tier star, while West Ham and Crystal Palace negotiate, it appears the Magpies are falling behind in the race to sign Eze. Steve Bruce ought to act fast to get amongst the frontrunners for the midfielder or risk missing out.