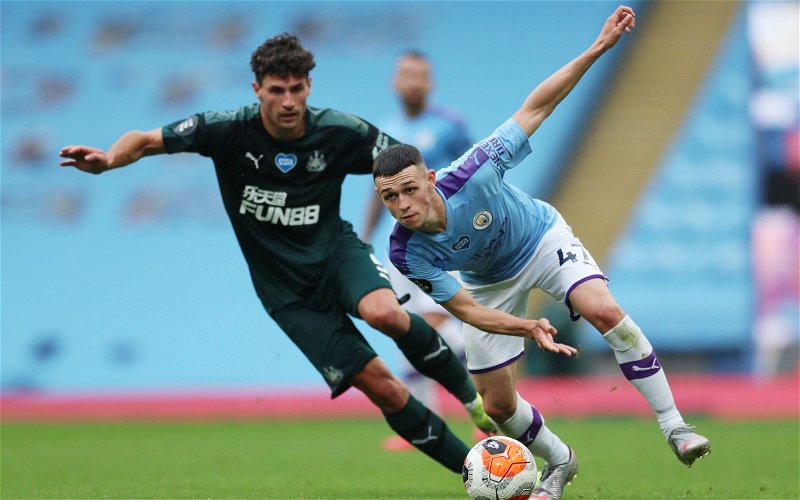 When you line up against Manchester City you know that you are in for 90 minutes of unrelenting pressure from the opposition as they ferociously hammer on the door, typically tending to burst through.

While Southampton opted to reinforce the entrance to their home with bricks and came away deserved 1-0 winners, Newcastle chose straw and were absolutely slaughtered for it.

A mitigating factor for Steve Bruce is that the Magpies were without the injured Allan Saint-Maximin, Jamaal Lascelles and Andy Carroll. However, that does not excuse electing to play Fabian Schar alongside Nabil Bentaleb in midfield. The Swiss international centre back may have performed admirably out of position, but his inclusion set the tone, with the Toon attempting to sit back and hope to keep them out.

It is safe to say Newcastle’s attempts to drop deep and form a blockade in front of their goal utterly failed. Before the encounter Emil Krafth, another Newcastle player operating out of position having been deployed at centre back, said that if the Magpies did not stay tight, narrow and keep the ball, they would be in for a long night. Neither of those three pleas came to fruition as the visitors were mesmerised by City’s 93.7 per cent pass accuracy, a Premier League record, and dispatched five past Martin Dubravka.

Facing Manchester City is a test few Premier League clubs pass, but in the reverse fixture, Bruce did mastermind a captivating 2-2 draw between the two sides. The Magpies had a meagre 24 per cent possession on that occasion, even less than Wednesday, but they were incredibly dynamic when in control of the ball, which resulted in scoring twice.

Schar is a silky defender with a fabulous passing range, highlighted by winning the northeast Footballer of the Year for 2018/19, but a pairing of him and Bentaleb in midfield could hardly be less mobile and more defensive. Bruce’s thinking is understandable, attempting to use the duo as a screen for the defence, but in reality, City sliced through them without flinching, completing 840 passes.

Had Newcastle not recently played the Sky Blues, the result would be somewhat tolerable. But given this was an even more abject display in the same vein as the recent FA Cup defeat, coupled with the knowledge that Southampton pressing City high proved so effective, Bruce has no excuse. Krafth’s comments show that the players knew what they should have been doing, but their managers’ selection in midfield made implementing a high press almost impossible.

By selecting Schar in the engine room, Bruce permeated an air of defensiveness and negativity with his team selection, and Manchester City duly punished Newcastle.