Newcastle United’s centre backs have arguably been their stars of the season thus far. From Fabian Schar early on to the ever-reliable Jamaal Lascelles, the three-man central defensive unit has been big for the Magpies.

But arguably the two most impressive players at the position have been two men who weren’t anywhere near the starting line-up at the beginning of the campaign.

Yes, Federico Fernandez and Ciaran Clark have been absolutely superb for Steve Bruce’s side. Indeed, midfielder Isaac Hayden even moved to gush over the defensive duo recently.

“You look at players like Ciaran and Federico, and even going back to last season, they weren’t playing as much,” he told the Northern Echo. “But it just shows the levels of professionalism they’ve got.”

Hayden has got it absolutely spot on, there. The two men have been phenomenal for Bruce at both ends of the pitch, and are arguably now undroppable.

That was reflected on Saturday when both men kept their place in the starting line-up against Manchester City despite the return to fitness of the aforementioned Swiss superstar Schar.

The statistics show how dominant the two men have been this term. As per WhoScored.com, Fernandez has the edge in average tackles, interceptions and clearances per game. He’s also dribbled past less often and commits fewer fouls.

Clark, though, draws more offsides and produces more blocks per outing than the Argentine international. Plus, the Republic of Ireland star has a higher average WhoScored rating of 6.96, marginally ahead of Fernandez’s 6.94.

It’s been fantastic to see the resurgence of two men who were almost written off last summer. Suddenly we’re wondering where people like Schar and Florian Lejeune fit into things, whereas six months ago they were keeping these two out of the team.

So Hayden is bang on to praise the duo for the way they’ve conducted themselves this season. They’ve been the ultimate professionals. 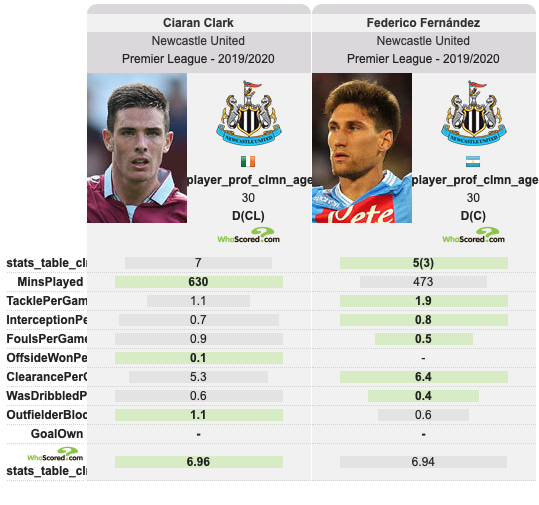