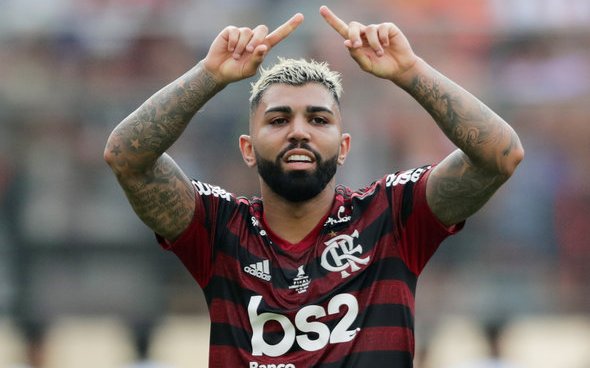 The Magpies correspondent revealed the news on The Chronicle’s news and transfer centre [24/11; 22:06], claiming that Steve Bruce’s side are just one of the several Premier League teams in for him.

The 23-year-old scored twice for Brazilian side Flamengo as they claimed the Copa Libertadores on Saturday night, although he was also sent off.

Barbosa has scored a phenomenal 31 goals in 38 games on loan in Brazil [Source: Transfermarkt].

This is an interesting potential signing, for a number of reasons. Barbosa is in unbelievable form at Flamengo, and has always scored freely in his homeland. However, that’s not been the case in Europe, not by any means. He’s scored just twice in 15 games at Inter and Benfica, but has 75 goals in 163 games back in Brazil. It’s difficult, then, to assess whether he’d be able to cut it in the Premier League. Perhaps he’d do better in the physical, frenetic, English top flight, because he is a powerfully-built man. However, if he couldn’t score regularly for Inter or Benfica what makes you think he could do so in this creatively stagnant Newcastle team? The Magpies fans will fear this is another Joelinton all over again. The former Hoffenheim man has only scored once since his club record move last summer, and so is Barbosa just a more on-trend version of the Newcastle frontman? That’s the concern, and so perhaps Bruce should take a look at a more proven top flight striker instead.