Bruce: Gayle going no where 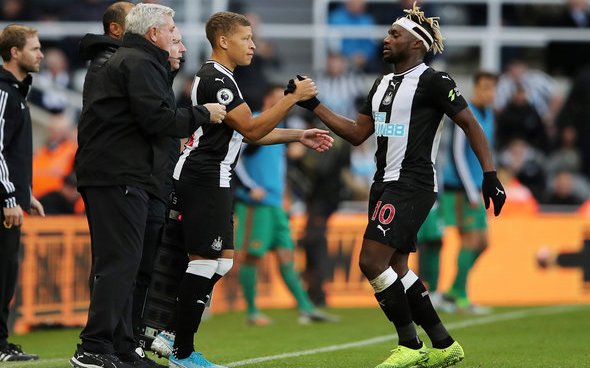 Steve Bruce has admitted that he does not want to lose Newcastle United forward Dwight Gayle in the January transfer window.

The Magpies’ boss reiterated his stance from the summer and shared that the 29-year-old is knocking on the door for an opportunity in the Premier League after coming back from injury.

Bruce confirmed that he is certain that he wants Gayle to stay at the club, and praised his infectious attitude on the rest of the squad in training.

“I don’t want to lose him,” he told the Chronicle.

“I see him at the moment knocking on the door because the more he’s training, and he’s got an infectious enthusiasm about him on the training ground.

“I can’t see him leaving in January, no.”

Gayle has yet to make a start in the Premier League so far this season and has had to settle for three appearances as a substitute behind Joelinton.

Given Bruce’s options in the final third, it is totally understandable that he wants to keep Gayle around in January. Joelinton has struggled since arriving from Hoffenheim in the summer, only scoring once despite starting in every single game so far. Miguel Almiron has also taken a central role alongside the Brazilian, and he hasn’t even been involved in a goal since joining in January at the beginning of the year. Andy Carroll has also been hit with a fresh set back which has sidelined him [Daily Mail] so that only leaves Bruce with Gayle as a potential replacement in the final third. So, unless the Magpies sign one or two fresh faces to strengthen his options up front, it seems like Gayle will get an opportunity to lead the line eventually. With Bruce’s comments on Gayle, it seems like his chance will come sooner rather than later at St James’ Park, and the 29-year-old could be the poacher that they are desperately calling for.