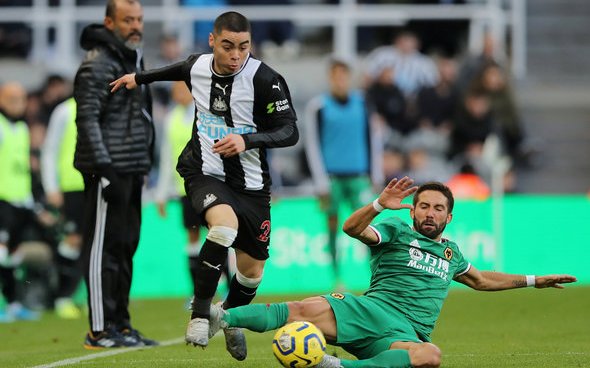 West Ham enforcer Fabian Balbuena revealed he sometimes talks to Newcastle United attacker Miguel Almiron ahead of the Hammers clashing with the Magpies on Saturday.

The Irons centre-back shared that he speaks with Almiron when they play together for Paraguay and then proceeded to share how the attacking midfielder was finding life at St James Park based on their chats.

Balbuena claimed Almiron was happy to be playing in the Premier League as it’s the best league in the world, before also insisting he is trying to do his best for Steve Bruce’s side.

“I sometimes speak with him and we speak in the national team. He is happy to be playing in the Premier League, which is the best league in the world, and he is trying to do his best for Newcastle,” said Balbuena, as quoted by West Ham’s official website.

Almiron has constantly come in for flack this season as he has failed to score or assist a goal since joining the Magpies from MLS club Atlanta  United in January, yet it seems he is at least staying upbeat. With the amount of criticism that Almiron receives no one would blame him if his head had dropped over being at Newcastle as nothing is clearly going to plan. However when you consider Balbuena’s remarks and the fact Almiron seems to always give 100% in his outings, then surely his luck will change soon enough. The 25-year-old has been getting in enough goalscoring positions during his 10 league outings this season so far after all, as he has averaged 1.4 shots per game (Source: WhoScored). Almiron just needs to keep doing what he is doing, but try to stay at little more composed in front of goal. While that’s easier said than done, hopefully, the attacker is getting the support and encouragement he needs from his teammates as well as his manager in order for that area of his game to be addressed.