After all these years of watching him spout his particular brand of punditry on the BBC and BT Sport, we shouldn’t be surprised by Robbie Savage’s misguided take on Newcastle United’s victory over Manchester United on Sunday.

There seems to be a real desperation amongst former professionals to latch onto anything positive Steve Bruce does at St James’ Park and hold him up as the right man for the job. Perhaps it’s because the Magpies boss is a nice bloke, perhaps it’s because many of them know him personally, but it’s getting a bit ridiculous now.

That has certainly been the case after Sunday’s result. Garth Crooks spent much of his time praising Bruce for selecting Matty Longstaff rather than Longstaff himself after selecting the teenager in his Premier League Team of the Week on the BBC Sport website.

Now, Savage has come out with his verdict: “If it’d been a Rafa Benitez team performance today: organised, disciplined, like it was… if Rafa would have done that performance today against Manchester United all the Newcastle fans on here would be saying ‘oh, it was a Rafa masterclass,” he told BBC Radio 5 Live.

Savage is surely kidding, isn’t he? Yes it was a good performance from Bruce’s team, but you cannot simply ignore the entire context of the game.

This wasn’t a victory over a title-chasing team like the one Benitez masterminded over Manchester City in January. No, it was a narrow win over a United team which is a shell of its former self.

A victory over the Red Devils doesn’t carry enough weight as it used to, it isn’t worth as much. Ole Gunnar Solskjaer’s side are absolutely awful, so this definitely isn’t the equivalent of a victory over Pep Guardiola’s champions.

Plus, are we forgetting that the Magpies were battered 5-0 by Leicester City last weekend? That’s all forgiven now, is it? This is typically reactionary punditry from Savage, nothing more. 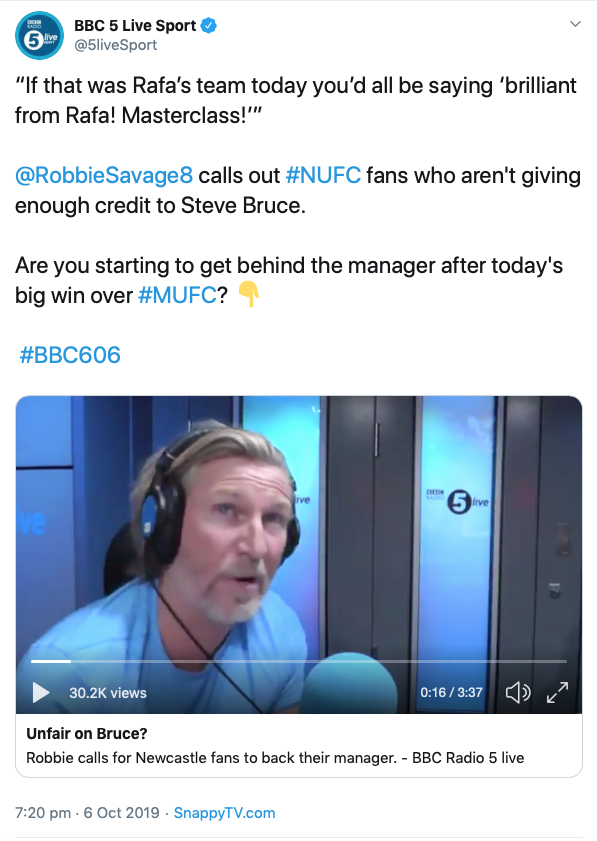