Newcastle United duo Allan Saint-Maximin and DeAndre Yedlin are both set to feature against Manchester United on Sunday, according to journalist Craig Hope.

The Daily Mail reporter revealed the news on his personal Twitter account on Sunday, claiming that two men who have played a combined 73 minutes this season will play against the Red Devils.

Both men have missed time through injury but are clearly now fit enough to play some part at St James’ Park.

“Also looks like Saint-Maximin & Yedlin set to play. Bruce has to try something different to be fair,” he wrote. 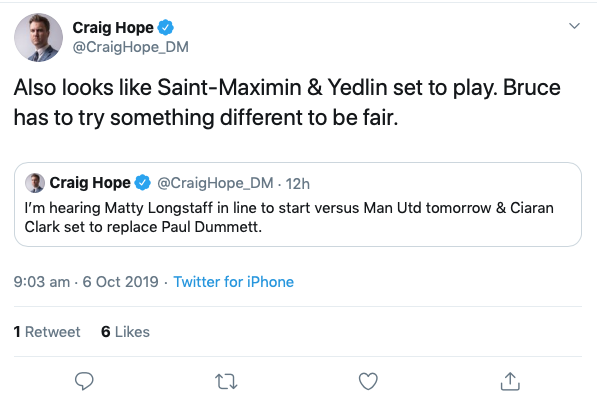 There’s no doubt that, as Hope says, Steve Bruce needs to try something different on Sunday. Whatever he did against Leicester City last weekend, particularly going for a back four, didn’t work, and so he needs to come out and take a few risks against an equally deflated team in United. Clearly Emil Krafth is struggling to get going on Tyneside since his summer move from French side Amiens, while Javier Manquillo doesn’t appear to have the full trust of Bruce. With that said, it’s easy to see a situation where Yedlin starts on Sunday. Meanwhile, Saint-Maximin is someone who Bruce has repeatedly referred to as being capable of providing the attacking spark that the Magpies have missed this season, so it’s perfectly reasonable to expect him to start at St James’ as well. Again, Bruce needs to take a few risks, and so he might as well roll the dice with these two players.