On paper, Miguel Almiron should have been a corking signing for Newcastle United. Lively, direct, exciting – he is in many ways the quintessential Toon cult hero, and his performances for Atlanta United and Paraguay prior to his arrival in England suggested that he had more than enough talent to be a real hit in the Premier League. What has followed, however, has been a largely underwhelming spell that gets more and more frustrating with each passing week. The 25-year-old has still yet to assist or score for the Toon Army, and many supporters allowed their indignation to bubble over on social media during the first half of United’s Premier League clash with Wolves on Sunday. Almiron’s lack of involvement in front of goal is obviously bad, but what is probably worse is the lull in quality he is suffering from at the moment. In the Premier League so far this season, he has managed just 0.3 key passes per game, as well 0.9 successful dribbles, as per Whoscored. That’s simply not good enough for a player who cost as much as he did, and unless something changes soon, he will surely have to be dropped, even if it’s just to give him the opportunity to recalibrate himself. 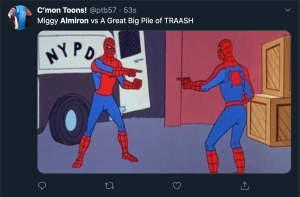