Gibbo: Saint-Maximin is a whirlwind 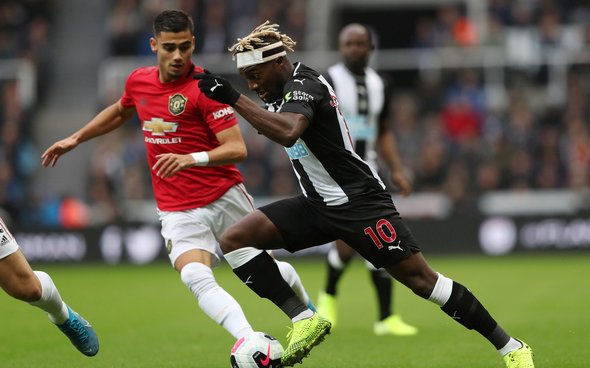 Allan Saint-Maximin is a “whirlwind” of a footballer, according to Chronicle columnist John Gibson.

The Frenchman was instrumental in Newcastle United’s 1-0 win over Manchester United last Sunday, putting in a lively and creative shift in front of the St. James’ Park faithful.

And Gibson has wasted little time in singing his praises.

Writing in a piece for the Chronicle, he said: “A whirlwind would create less attention and while his impact since a £16m move from France has been muted mainly due to injury when he was finally let out of the stable on Sunday tea time he dazzled in a rare victory.

“He has always been a kaleidoscope of a player . . . full of self confidence with a determination to attack at the expense of mundane defensive duties, he was accused by a previous manager, Patrick Vieira no less, of a lack of discipline and desire.

“Such a scathing public condemnation by a national legend would have destroyed a lot of young players but it couldn’t dent the self-belief of our Saint.

“He breezed into Newcastle with more bounce than a beach ball and proceeded to win over local hearts and minds.”

It’s hard not to love Saint-Maximin. Here is a player who clearly adores the game, and who performs with such style and unpredictability that he is always going to be a popular figure amongst fans. To get a measure of just how special a talent this lad is, he managed more successful dribbles per game than Lionel Messi last year, as per Whoscored. Obviously things haven’t necessarily gone to plan thus far on Tyneside, and he has struggled to get regular minutes because of niggling injury issues, but last Sunday was the first time that the Toon Army got a proper glimpse of what he can do. With four successful dribbles, two key passes, and two shots on goal, as per Whoscored, he looked every inch the attacking live wire, and more excitingly still, he seemed to have extra gears to move up into. If he can keep himself fit, the Saint promises to be a cult hero in the north east.