Former Republic of Ireland international Tony Cascarino has gushed over the performances of Salomon Rondon at Newcastle United last season.

The Venezuelan hitman produced a terrific campaign on loan at St James’ Park last time out, earning the Magpies’ Player of the Year award. However, he was allowed to leave the club this summer, and now plies his trade in China under Rafael Benitez.

Cascarino is a big fan: “They got Joelinton in and hopefully he can prove he can be a quality striker,” he said on talkSPORT [09/10; 07:38]. “I think Rondon was one of the most underrated players in the Premier League.

“I really like Rondon. I think he led the line brilliantly. And he wasn’t fit when he joined Newcastle. By the time he got fit, Newcastle were a completely different team.”

There’s no doubt that Rondon was absolutely tremendous for Newcastle in the 2018/19 season. The 30-year-old led the line superbly and forged a wonderful partnership with Ayoze Perez and Miguel Almiron in the Magpies’ attack. Joelinton has come in for a club record fee in the summer but has so far failed to provide the same quality up front as Rondon did last term. The statistics tell you that the Brazilian is struggling to match what his fellow South American did. As per WhoScored.com, Rondon averaged more shots per game than Joelinton, while he was fouled more and had less unsuccessful touches. Now, there are signs of encouragement for the current Newcastle number nine. The former Hoffenheim man is currently averaging more key passes and dribbles per outing, while he’s being caught offside less than Rondon was. However, his goals and assists tally is way down at the moment, and he’s going to struggle to match the Dalian Yifang star’s numbers in that respect. 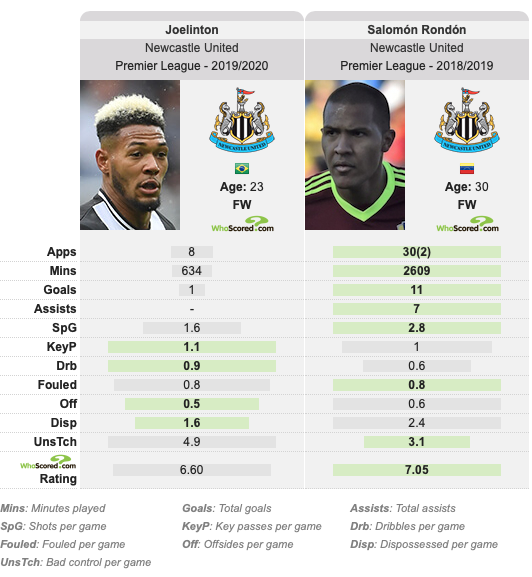