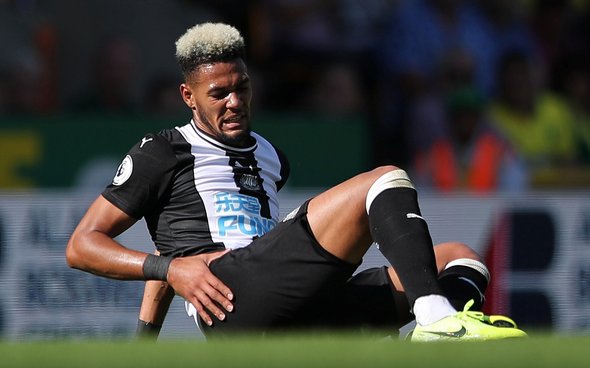 Ian Abrahams was unimpressed with Newcastle United attacker Joelinton after seeing him feature in the 3-1 loss to Norwich City on Saturday.

The talkSPORT broadcaster stated that the kindest thing he could say about the Magpies player’s display was that he struggled.

Abrahams highlighted Joelinton’s £40million price tag, as per the BBC, before then raving about Norwich City forward Teemu Pukki after his hat-trick against Steve Bruce’s side.

“I watched two strikers on Saturday, one who cost £40million in Joelinton for Newcastle who struggled, the kindest thing I can say about it, is that he struggled,” said Abrahams on talkSPORT (12:55, Monday, August 19th).

“And one who cost nothing, Teemu Pukki who arrived from Brondby and the man just scores goals, I have to admit I was wrong, I thought he wouldn’t score goals in the Premier League.

“And on Saturday he got an absolute worldie and he took control with the other two goals.”

Joelinton didn’t have the best day at the office on Saturday, but did Abrahams have to be so harsh? It’s not like many of his Newcastle teammates impressed. The 23-year-old Brazilian is still adjusting to life in the Premier League after joining the Magpies earlier in the summer, and it was always going to take time for him to settle into the side. It’s also worth noting that Joelinton’s game was cut short on Saturday after he went off injured, so who knows he may have come into his own in the last 20 minutes of the match if he was still on the pitch. The 23-year-old had two shots on goal, with neither hitting the target, which at least showed he was getting in good positions, and he touched the ball 35 times which at least shows he was putting himself about in order to get on the ball. (Source: WhoScored)  Granted Joelinton looked more of a handful against Arsenal, where he had three shots and touched the ball 53 times, as per WhoScored, but given he has only featured in two games, would it be a surprise in the coming weeks if the Brazilian finds his feet and starts hitting the back of the net? Surely not. It also wouldn’t be a surprise if Abrahams then starts gushing about him instead.