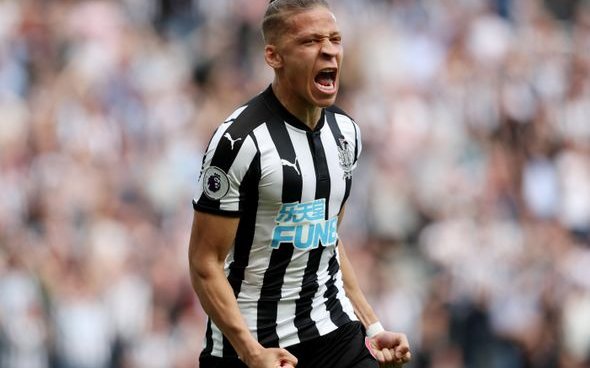 Durham shared that he thought Carroll and Gayle could work well together after Darren Gough suggested that Newcastle were better off playing those two up top rather than Joelinton or Yoshinori Muto.

Both Gayle and Carroll are yet to feature for Steve Bruce’s side this season due to injury as Gayle is on the sidelines due to an issue with his calf, as per the Shield Gazette, while Carroll is yet to make his second debut for the Magpies as he is still recovering from ankle surgery (Source: The Times).

Carroll and Gayle could work well together, as the little and large strike partnership has famously worked well for teams in the past, see Emile Heskey and Michael Owen for more information. Gayle has the pace to run on to the balls that the 6ft 4in tall Carroll (Source: Transfermarkt) could win in the air and knock on for him if Bruce opted to use the 30-year-old as a target man. Also given that both have a point to prove, there probably wouldn’t be a more determined strike partnership in the Premier League. Gayle needs to prove to everyone he is capable of scoring in the Premier League as he has averaged just 0.21 goals per game in the top-flight after scoring just 21 goals in his 99 appearances (Source: Premier League). While Carroll needs to prove that he can stay fit and still be a force in the Premier League like he once was. The 30-year-old averaged a goal every two games in the Premier League in his 2015/16 campaign, he scored 13 goals in 26 outings (Source: Premier League), but in recent times due to his constant knack for picking up injuries, as per Transfermarkt, he is more famous for being in the medical room than on the pitch.