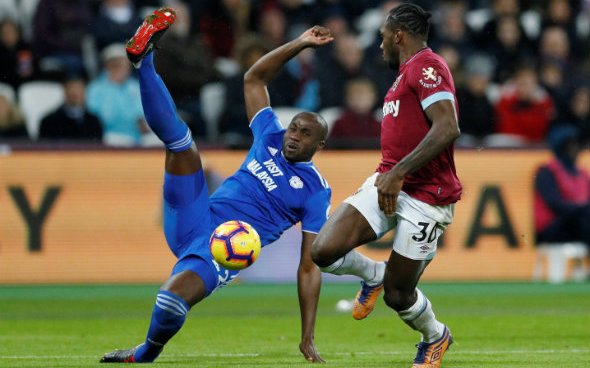 Sol Bamba suggested that Newcastle United should be fully focused on the Premier League this season ahead of the Magpies’ League Cup clash with Leicester City.

The Cardiff City defender was asked whether Steve Bruce’s side should be targeting cup success this season, and he seemed on the brink of urging the Magpies just to concern themselves with their league form.

Bamba claimed that due to the Magpies’ recent problems, Mike Ashley and Rafa Benitez’s exit, then any Newcastle fan would rather see their side steer clear of Premier League relegation than lift a cup.

The centre-back then added that he believes only steady clubs are capable of having a good cup and suggested that when he says steady, what he actually means is a side destined to finish in the top-eight.

“It has to be Premier League especially given the problems they’ve had with the ownership to Rafa Benitez leaving,” said Bamba on Football Centre (Sky Sports News, 11:28, Wednesday 28th August).

“So I think you have to be a steady club if you like, you need to be guaranteed top-eight before having a good cup run I think.”

Bamba’s verdict missed the mark, to say the least as if the Magpies wait until they’re a guaranteed top-eight side in the Premier League, which is a very competitive division to say the least, then they might as well rip the trophy cabinet out of St James Park for now.

The Magpies finished 13th in the Premier League last season, 10th the season before and the campaign before that, they found themselves in the Championship.

So you feel many Newcastle fans will be rolling their eyes over Bamba’s claim, as why shouldn’t their club go all out to win a cup as if they do that, it doesn’t mean they’re doomed to relegation.

It shouldn’t be an either-or question.

Granted Wigan won the FA Cup in 2013 only to be relegated by the time the season ended, as per the BBC, but they didn’t finish in the bottom three due to excelling in another competition, it was a coincidence.

Also, Watford weaved their way to the FA Cup final last season and it’s not like they were guaranteed an eighth-place finish before targetting a cup run.

The Hornets also didn’t suffer relegation last season despite a long stretch in the prestigious cup competition and finished a respectable 11th-place, which should have shown Bamba that sides can have their cake and eat it too.

So with that in mind, hopefully Bamba isn’t a secret advisor to Newcastle boss Steve Bruce as his stance and logic on the club targeting a potential cup run is flawed, to say the least.