40m left for Newcastle to spend

Newcastle United have £40million left in the transfer kitty with Steve Bruce wanting four more players signed before the summer window slams shut, according to the People.

The national newspaper’s print edition (Sunday, August 4th, page 49) states that Bruce won’t have a problem with Magpies owner Mike Ashley during his honeymoon period at the club, but he will discover this week how savvy the club is with their transfer budget.

The People report that while there is £40million available to spend on the four extra bodies that Bruce wants, getting deals done is taking some time. 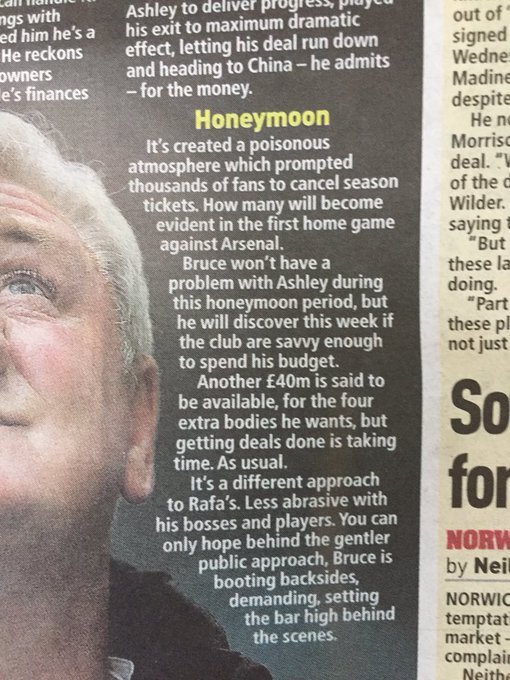 Newcastle have already splashed the cash on Brazilian Joelinton, they spent £40million on him (Source: BBC), and Ashley also opened his chequebook to welcome winger Allan Saint-Maximin to the club from Nice as he is thought to have cost £16.5million (Source: BBC).  Bruce has also seen defender Jetro Willems added to his squad, as the Magpies agreed a loan deal with an option to buy for him (Source: BBC), and also saw free agents Kyle Scott and Jake Turner acquired. However, Scott and Turner are both young players so it’s hard to tell if they will be getting many first-team opportunities in the upcoming campaign. Yet while the Magpies have welcomed a few new faces to the club this summer, it’s no surprise they still have a decent transfer budget left. After all, Newcastle haven’t spent overly too much in previous transfer windows, so likely have plenty of cash in reserve, and they sold Ayoze Perez to Leicester City for £30million earlier in the window (Source: BBC).