Steve Bruce is predicted to make eight changes to Newcastle United’s starting line-up ahead of their return to Premier League action against Watford at St James’ Park on Saturday afternoon.

Emil Krafth and Jetro Willems are both likely to miss out after suffering injuries in the Carabao Cup defeat to Leicester [Shields Gazette] on Wednesday while Matt Ritchie will definitely be sidelined after being hit with “ankle ligament damage”, as confirmed by Bruce via BBC Sport.

Karl Darlow, Ciaran Clark, Matty Longstaff, Jonjo Shelvey and Yoshinori Muto could all also be dropped so that Bruce can revert to a similar line-up to the one that he used in the 1-0 win against Tottenham in the league last week. 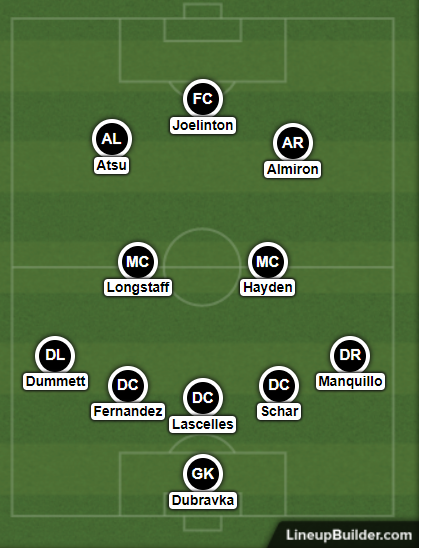 Martin Dubravka is predicted to return in goals behind a back-five of Javier Manquillo, Fabian Schar, Jamaal Lascelles, Federico Fernandez and Paul Dummett, who is likely to move to the left wing-back position due to Ritchie’s injury.

Sean Longstaff could replace his brother in the centre of the midfield while Isaac Hayden, who has been one of the best players for Newcastle so far this season, is expected to stay in the side.

In the attack, Christian Atsu and Miguel Almiron are predicted to start in support of centre-forward Joelinton after Bruce suggested that they will be fit and ready for this weekend’s league action [Shields Gazette].

Newcastle will go into their clash against 20th-placed Watford just one place above them in the Premier League standings as Javi Gracia’s side are yet to pick up a single point after three games.

The Magpies could fly up the table though if they were to pick up maximum points and pile more misery on the Hornets, who may well be starting to lose patience with their man in the hotseat if a report by the Daily Mail is to believed.