The free-agent market is something that Newcastle United took full advantage of on transfer deadline day, with the Magpies securing the signing of former forward Andy Carroll.

Carroll will return for his second stint at his boyhood club, after somewhat disappointing at both Liverpool and West Ham down to his rotten injury luck since leaving St James’ Park.

The Mirror clicked on to Newcastle’s venture into the free-agent market, and recently released a report naming available players who would suit English clubs. The Magpies were listed for four separate players, with Hatem Ben Arfa, Martin Skrtel, Daniel Sturridge, and Mario Balotelli all being mentioned.

Bruce can sweep three of those names under the carpet and forget about them quite easily, but the mention of Balotelli is an intriguing one, to say the least, with the Italian international more than capable of still doing a job for the North East club.

Should the 28-year-old remain a possibility on a free come January, Newcastle should seriously consider laying the groundwork to potentially launch a move for the former Manchester City striker.

In his recent season with Marseille, Balotelli impressed when managing to finish the season with eight goals in his 15 appearances in Ligue 1.

When you compare Balotelli with the Magpies’ recent club-record signing Joelinton last season via WhoScored, it is hard to see a difference in the two forwards despite one costing a lot more than the other would have. 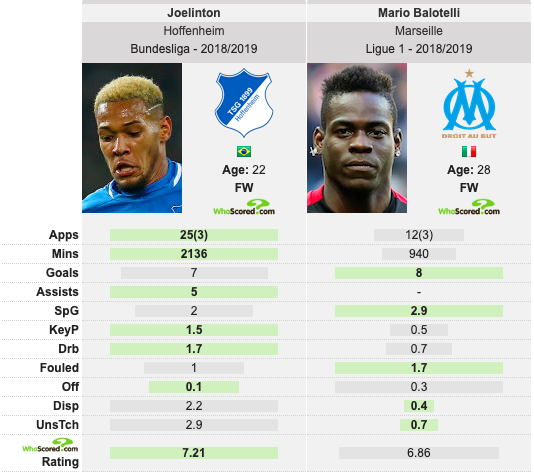 Not only did Balotelli score one more goal in 13 fewer appearances, but he also averaged almost one more shot per game he played – with the Italian finding little pockets of space much more often in and around the box.

The 28-year-old also took better care of the ball, being dispossessed almost two fewer times each game, and took a lot fewer bad touches on top of that – both of these stats led to Balotelli being fouled more as his close control caused more problems for the opposition defence.

With that being said, Newcastle must surely start laying the groundwork to potentially sign Balotelli, who could bring a whole new dimension to Bruce’s attacking ranks at St James’ Park in the future.