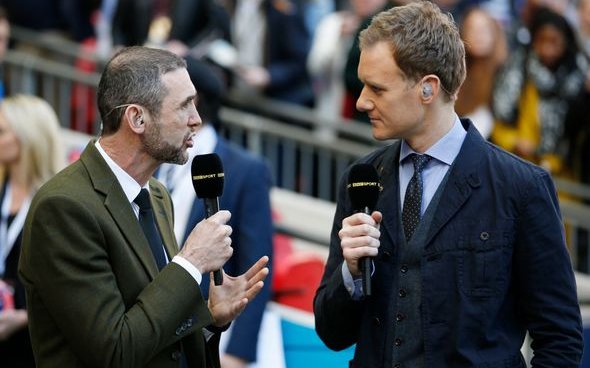 Martin Keown raved about Andy Carroll after being asked for his thoughts on Newcastle United signing the forward on transfer deadline day.

The Magpies confirmed on Thursday, via their official website, that the 30-year-old attacker had signed an initial one-year deal with the club, and Keown was asked what the forward brought to the table.

Keown claimed Carroll was the best header of the ball the Premier League had seen in the last 10-15 years and suggested Magpies boss Steve Bruce needed to manage the player’s minutes to get the best out of him.

“He does offer something a little different, he is probably the best header of the ball that we’ve seen in the Premier League for 10-15 years,” said Keown on talkSPORT (10:53am, Friday, August 9th).

“Exactly (Jim White said Carroll is like Duncan Ferguson) he is that type, he sort of flies through the air, I was calling him Tarzan a few years ago as he was that good in the air.

“So if he can get anywhere close to that, you have to nurture him in the right way, make sure he is fit and available, then bring him back at the right time.

“He always seems to be coming back from some sort of injury, and he’s not quite ready or right, manage his minutes”

Carroll is definitely good in the air, but is he the best header of the ball that the Premier League has seen in recent times? Peter Crouch may have something to say about that. While Carroll has scored 24 headed goals in England’s top-flight, Crouch scored 40 in the Premier League before calling time on his career earlier in the summer. In fact, Chelsea forward Olivier Giroud and Crystal Palace attacker Beneteke have also scored more goals from headers as Giroud has netted 30 with his head, while Beneteke has grabbed 26 (Source: Premier League). Also while Keown focuses on the fact Carroll can be strong in the air, that isn’t the only string to his bow. After all the 30-year-old has grabbed almost as many goals with his left foot in the Premier League, as he has scored 23 with his left peg. However, it’s no surprise that Keown believes Bruce needs to manage Carroll’s playing time carefully as his recent injury record is woeful. The 30-year-old only managed 12 appearances, without scoring, in his 2018/19 campaign for the Hammers due to injury getting the best of him again.